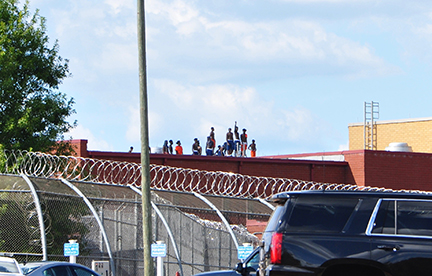 A closeup of some of the inmates at the Sumter County YDC on the roof Friday afternoon.

AMERICUS — An undetermined number of inmates at the Sumter County Youth Detention Center on McMath Mill Road attempted to escape the facility shortly after 3 p.m. Friday. Local authorities surrounded the facility, and the inmates could be seen on the rooftop.
It was ascertained after 4 p.m. that 22 inmates were not where they were supposed to be in the facility.
A 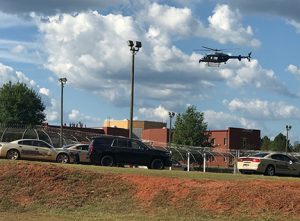 This Georgia State Patrol helicopter hovered over the Sumter YDC giving ground personnel the exact locations of the inmates on the rooftop and their movements.

Georgia State Patrol helicopter hovered over the complex giving ground personnel information on the exact location of the inmates on the roof.
As of 5:30 p.m., there were 17 on the roof, and a response team has just arrived. Negotiations were also underway with the inmates.
Shortly before 6 p.m., Sumter County Sheriff’s authorities were ready to turn the scene back over to the YDC personnel. It would up to that response team to get the inmates off the roof and back into their beds.
As of presstime, that was all the information available. More information on the developing story was to be posted on americustimesrecorder.com as it became available.