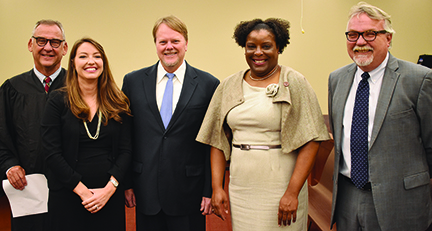 AMERICUS — Southwestern Judicial Circuit District Attorney, Lewis R. Lamb, announced that his office has added three new Assistant District Attorneys. Brian Rutland, Cania Brown-Gordon, and Catherine Duncan have joined the office this month.
Duncan was sworn in Friday as an Assistant District Attorney by Superior Court Chief Judge Rucker Smith. She previously served as an assistant public defender in Americus, holding that position since 2010. Among other duties, she will represent the State of Georgia in child support enforcement cases. She is a 2010 graduate of Faulkner University’s Thomas Goode Jones School of Law. She obtained her bachelor of arts degree in communications from the University of Georgia in 2006. She is a member of the State Bar of Georgia and admitted to practice before both the Georgia Supreme Court and the Court of Appeals. She lives in Americus with her husband Terence Duncan and their two children.
Brown-Gordon is an experienced prosecutor who worked for the Dougherty County District Attorney for nine years, prior to coming to the Southwestern Circuit. Over her career as a prosecutor, she has specialized in cases involving domestic violence and crimes against children. She holds undergraduate degrees from Bainbridge College and Georgia State University and obtained her juris doctorate from Mercer University’s Walter F. George School of Law in 2008. She is a member of the State Bar of Georgia and is licensed to practice before the Georgia Supreme Court, the Court of Appeals, and the United States District Court for the Middle District of Georgia. She currently resides in Albany with her two children.
Brian Rutland, who has more than 20 years of trial experience, is the Circuit’s new juvenile court prosecutor. He is a “Double Dawg” — having earned both his bachelor of arts degree and his law degree from the University of Georgia. Since graduating law school in 1994, Rutland has practiced law throughout south Georgia, including stints as a prosecutor in Bainbridge and Camilla. He is a member of the Georgia Bar and admitted to practice before both the Georgia Supreme Court and the Court of Appeals.
Following Duncan’s swearing in ceremony, District Attorney Lamb stated, “I am pleased to welcome Ms. Duncan, Mr. Rutland, and Ms. Brown-Gordon to our office. They are all experienced attorneys who will be a credit to our office and our Circuit. We are now almost fully staffed, with nine attorneys in our office, and I think this is the finest group of prosecutors we have ever had in the Southwestern Circuit.”
The Circuit is comprised of six counties — Lee, Macon, Schley, Stewart, Sumter, and Webster — and the District Attorney’s office is responsible for prosecuting felony, misdemeanor, traffic, and juvenile cases throughout those counties.