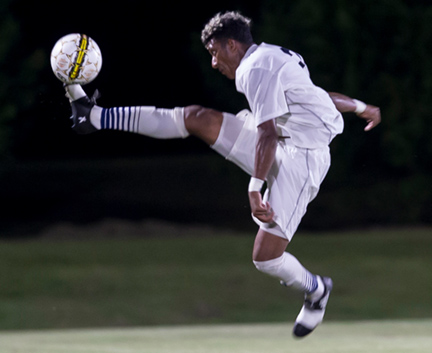 Junior defender JP Merlet seen here in a previous game against Brewton-Parker. Merlet was credited with an assist on Caleb Zolman’s goal for the Hurricanes against Talladega. Photo by GSW

AMERICUS –A late miscue by the Georgia Southwestern State Men’s Soccer Team in the 79th minute led to a 2-1 loss to Talladega College on Saturday night, September 15, at Hurricane Field.

With the score tied 1-1, Talladega’s Isamnia Cohen received a breakaway pass from teammate Renan Dinis after intercepting a corner kick by GSW. The Hurricanes were out of position on their offensive end. Cohen found himself in a one-on-one situation with GSW keeper Francesco Bazzano. Bazzano was up near the top of the 18-yard box. Cohen was able to loft a shot over Bazzano and into the back of the net for the winning goal for the Tornadoes.

Talladega scored the first goal of the match when Matheus Severino scored in the 11th minute.

The Hurricanes got the equalizer in the 46th minute when Caleb Zolman took a long throw in from J.P. Merlet. Zolman then turned and floated a shot from the left corner of the 18-yard box inside the far post for his second goal of the season.

The loss was the Hurricanes’ second straight and they fall to 2-3-1 on the season. Talladega improves to 3-1. This was the first meeting between the two schools since 2013. The two teams have faced each other three times, with Talladega winning all three matches by one goal.

The Hurricanes will try to get back into the win column when they host Spring Hill College on Wednesday at 7 p.m.