Board of commissioners OKs request from Cobb resident 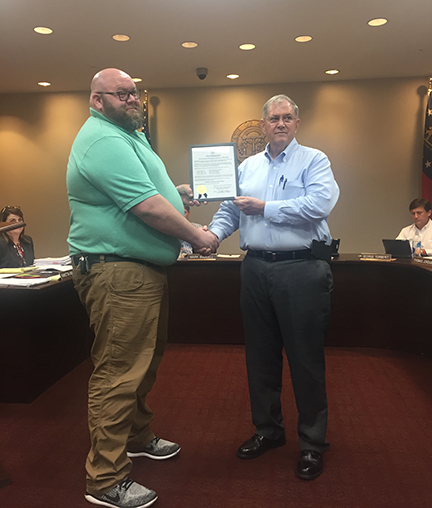 Board of commissioners chairman Randy Howard issues a proclamation honoring Sumter County Emergency Management Director Nigel Poole for his service to the county as part of National Preparedness Month.

AMERICUS — At its monthly work session, the Sumter County Board of Commissioners had a public hearing to discuss Cobb resident Ted Goldsberry’s request to replace a 1970 manufactured home with a new one on a lot located at 788 Flintside Drive in Cobb. Code Enforcement Director Mike Sudduth gave photos to the commissioners showing Goldsberry’s current manufactured home. “Mr. Goldsberry is asking to be able to replace that with a new manufactured home there,” Sudduth said. “We haven’t had anybody to oppose the request.”
Goldsberry, who was at the hearing, explained his desire to replace his old manufactured home with a new one, and that he plans to live there. “It’s going to be my residence: me and my two dogs,” he said. Board Chairman Randy Howard asked if anyone wanted to speak on behalf of Goldsberry or against his request. Nobody spoke.
Commissioner Mark Waddell made a motion to approve Goldsberry’s request and Commissioner Thomas Jordan seconded it. The approval passed unanimously.
The board also heard from George Stamos who owns Buccaneer’s Seafood, a mobile seafood sales truck. Stamos said he had been operating in Sumter County since February. He told the board that two weeks ago, Col. Eric Bryant of the Sumter County Sheriff’s Office sent a deputy to them and asked them to shut down due to a complaint. “We complied and shut down,” Stamos told the board. “We talked with him (Bryant) and his office. We picked up an application that, I believe, is based to protect your citizens from transient contractors after the tornado in 2005.” Chairman Howard reminded Stamos that the tornado hit in 2007. Stamos said that they operate on a weekly schedule and have a lease agreement with the Drivers at Drivers Propane, where Stamos’ business is located. Stamos explained that people love and enjoy their product and that they are not transient. “We do pay through the state tax system,” he said. “Your county gets the three percent that it’s due from our sales.” Stamos requested that he be allowed to reopen his business. “I don’t feel we are transient. We are here to stay,” he said. County Attorney Kimberly Reid referred to an ordinance that protects the citizens of Sumter County from transient businesses that come into the county temporarily, set up shop and do business, then leave before the citizens have any recourse. “What I’m going to do is look at the ordinance to see if it gives us any guidance on the definition of temporary,” Reid said, adding that if a business can prove they are planning to stay permanently, that business would not fall under that ordinance. She recommended that Stamos continue to operate his business until or unless there is sufficient evidence that he plans to stay temporarily. Reid told the board that she will study the ordinance further. Stamos was granted his request to continue to operate his business.
Col. Eric Bryant told the board that it is time for his department to do their annual renewal with their medical provider to provide medical services at the Sumter County Jail and the inmates at the Sumter County Correctional Institute. “The contract was given to us last month and Attorney Reid had to make some minor changes,” Bryant said. He said that the one major change the medical provider had requested was a small increase in their monthly per diem. He requested that the board approve the contract. Chairman Howard decided to further discuss the issue at Tuesday’s meeting.
Being that September is National Preparedness Month, Howard made a proclamation honoring Sumter County Emergency Management Director Nigel Poole and presented him with a plaque commemorating the occasion.
Howard asked if there were any citizen comments. There were none.
At that point, Commissioner Waddell made a motion to go into closed session with the tax assessors to discuss litigation. Commissioner Jordan seconded the motion. This was the first of two closed sessions. Commissioner Waddell made a motion to come out of closed session and Commissioner George Torbert seconded it.
Once out of the first closed session, the board approved unanimously for Fire Chief John Ekaitis to apply for the Assistant to Firefighters Grant. Commissioner Clay Jones made a motion for approval and Torbert seconded the motion.
The board also discussed with Col. Bryant the situation with the air conditioning units at the Sumter County Jail. Bryant said that two to three of the 29 units on the roof of the jail are in disrepair. Torbert made a motion to put out an RFP to replace the three units. Waddell seconded the motion. The approval passed unanimously.
Once the work session was over, Waddell made a motion to go into a second closed session to discuss litigation and personnel. Torbert seconded the motion. The motion passed unanimously and the BOC went into their second closed session.