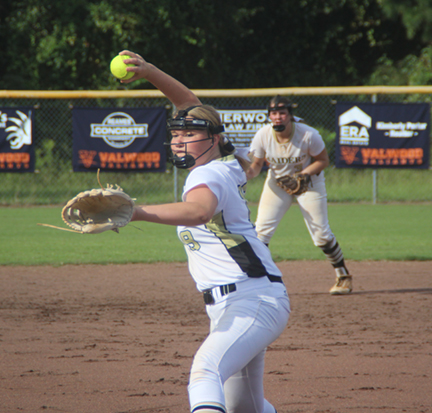 Southland starting pitcher Rylan Youngdale had a solid game in the circle and earned the win against Brookwood. Photo by Renae Kellam

THOMASVILLE – The Southland Lady Raiders extended their current winning streak to four games and improved to 4-0 in Region 3-AAA play with an 18-1 route of Brookwood on Tuesday, September 18, at the Brookwood School.

The Lady Raiders got on the board in the first inning as Ali Dent reached on an error by the Lady Warriors. Dent scored on an RBI single by Brookland Weaver. Weaver capped the scoring in the inning as she scored on a wild pitch, giving the Lady Raiders a 2-0 lead after their first at bat.

In the top of the second, Morgan Minick led off the inning with a bunt single. Minick, along with Abby Lightner, would later score on a single by Hannah Mitchell. Ali Dent followed that up with an RBI single, scoring Mitchell. Sara Beth Storey reached on another Brookwood error. That error allowed Samantha Wojnar to score. At this point, Southland led 6-0 after two innings. 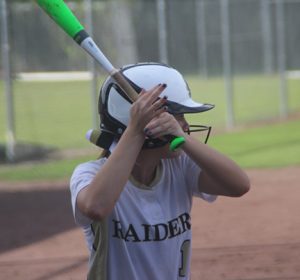 Southland’s Abby Lightner at the plate against Brookwood.
Photo by Renae Kellam

Southland scored two more runs in their half of the third inning. Katie Rogers led off the inning with a single. Morgan Minick then laid down a bunt, but the Brookwood pitcher threw the ball over the first baseman’s head, allowing Rogers to score. Abby Lightner grounded into a fielder’s choice as Minick was forced out at second base. Lightner then advanced to second on a passed ball, then advanced to third on another Brookwood error. Hannah Mitchell hit into a fielder’s choice, scoring Lightner.

With one out in the top of the fourth inning, Sara Beth Storey singled to right field. Carson Clements was brought in as a courtesy runner for Storey. Clements would later score on a wild pitch. Brookland Weaver then reached on an error by the Brookwood shortstop. The Lady Raiders were able to take advantage of several errors committed by the Lady Warriors. Katie Rogers drove in Weaver on an RBI single. After four innings of play, Southland led 10-1. Brookwood got their only run of the game in the bottom of the fourth inning.

Brookwood made a pitching change in the fifth inning, but that didn’t stop the onslaught of Southland. The Lady Raiders scored eight more runs to finish the game.

Southland starting pitcher Rylan Youngdale had a solid night in the circle for the Lady Raiders and earned the win. Sara Beth Storey led Southland with two hits. Five other Lady Raiders contributed with hits as well.

The win gives the Lady Raiders a 12-6 overall record and a 4-0 record in Region 3-AAA play. Southland will host Valwood in another region game on Tuesday, September 25, at 4:30 p.m.

If the Lady Raiders win that game, they will secure the Region 3-AAA Championship.