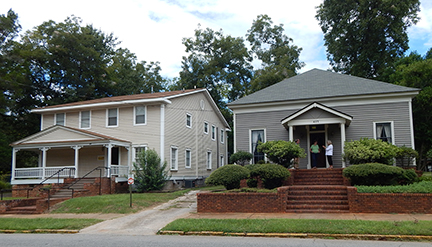 Habitat for Humanity International has donated the historical site at 417 W. Church St. to The Fuller Center for Housing.

AMERICUS — As Linda Fuller strolled through the building that once housed Millard Fuller’s law practice and the first headquarters of Habitat for Humanity on Church Street in Americus, she reminisced about the simplest of times at the birth of the affordable housing movement.
She noted the dust that had settled on the desk where she once sat, and tried to remember which landline phone was ringing — the one for Habitat or for the law practice. She was glad to see that the curtains she fashioned from bed sheets were still intact and that the cobweb-covered bell on the front door of the building still worked — well, every now and then, after a few tries.
That door — that blasted door! Literally, Linda Fuller blasted it with everything she had to remove layer after layer of paint as they spent three months getting the property ready to open for business. She ruined many of her work clothes in the process. Then, when it was ready to open, she realized she had another problem — she didn’t have anything to wear at the office.
“We had just come back from Africa, and I had left whatever clothes I had over there for people to have,” she said recently of their 1973-76 stint building homes in Zaire (now the Democratic Republic of Congo). “I had to go out and buy myself a dress. We didn’t have much money, so I wore the same dress every day.”
Millard and Linda Fuller — co-founders of both Habitat and The Fuller Center — purchased the property for $4,000 in 1977, from the Rev. Jim Jackson to serve as Millard’s law office. A small section of the law office served as the headquarters for the then-fledgling Habitat for Humanity, just a year old at the time with its only paid staff a part-time typist. Volunteers, including Linda and the Fullers’ children, assisted with Habitat’s early correspondence and newsletters.
“Millard Fuller’s affordable housing ministries were born at Koinonia Farm,” said David Snell, president of The Fuller Center for Housing. “His law office on Church Street was their nursery. It was there that the partnership housing concept that Millard and Clarence Jordan were inspired with took form becoming Habitat for Humanity and later The Fuller Center for Housing.
“We’re delighted that Habitat has turned this property over to us to ‘keep it in the family’,” Snell added. “We’ll honor its history, preserving it as a museum of the affordable housing movement, a movement that began right here in Americus, right here on Church Street.”
From those humble beginnings, Habitat would grow and move its headquarters more than once — although all within walking distance of the original office. Despite the simple roots they were planting, 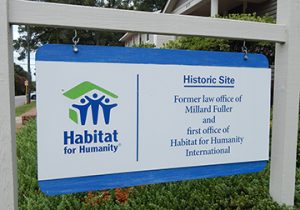 Linda knew something was growing even before former President Jimmy Carter joined the ministry and gave it star power that would almost instantly make Habitat for Humanity a household name.
“It was great having it as a mom-and-pop operation,” she said of Habitat’s first year in the law office. “But I had an inkling with Millard’s vast success in business (in the 1960s before the Fullers turned from a life of wealth to a life of service) and the way he was pushing, pushing as he always did, that it was going to grow pretty fast.”
After being forced out of leadership at Habitat, they would go on to found The Fuller Center for Housing in 2005, as a return to the simple, grass-roots principles with which they started. Linda recalls Millard’s final years of leading The Fuller Center until his death in 2009, as some of the happiest years of his life.
Today, The Fuller Center’s work continues to grow and Millard’s dream of eliminating poverty housing remains alive — and The Fuller Center for Housing remains headquartered in a small building that was donated by John and Sue Wieland, just a couple miles from the simple law office in which the Fullers’ ministry began.