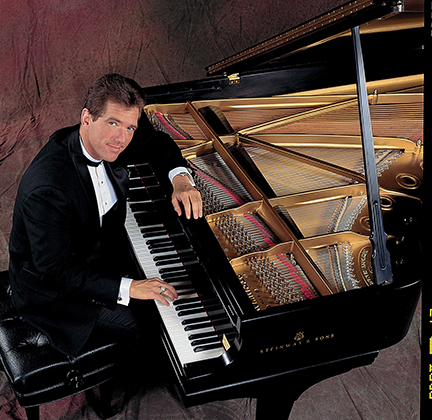 David Osborne at the Steinway.

AMERICUS — Renowned pianist David Osborne is giving a concert in honor of President Jimmy Carter’s 94th birthday. The concert is at 6:30 p.m. Sept. 29 at First Baptist Church, South Lee Street, Americus.
Steinway Gallery in Atlanta will provide a $200,000 concert Steinway for Osborne to perform. The public is invited to the concert at first Baptist Church and an offering will be received. Osborne will pose for autographs following a concert and sign CDs. Osborne is a signature international Steinway artist.
Osborne said he first met Jimmy Carter in 1987, at the Belz Factory Mall in Orlando, Fla. “I stood in a three-hour line at Borders Book Store to get my ‘Outdoor Journal’ by Jimmy Carter autographed,” he recalled. “I signed a 33 rpm recording for Mr. Jimmy at the book store. Secret Service Agent Buddy Bush took it and later gave it to President Carter. A few weeks went by and Pastor Dan Ariail, of Maranatha Baptist Church [in Plains] phoned me about playing for their church. President Carter was there and would be teaching Sunday school. My family went there and loved it. Plains Mayor Boze Godwin family took us in time after time over many years in Plains. This formed a lifetime bond with me and the Carter family and Plains.”
Osborne has performed for the Carters for the last 30 years, he said, and for almost all Jimmy Carter’s birthdays for the past three decades. “When I lived in Orlando for 10 of those years, I was there for the Carters sometimes twice or three times a month, back in those days,” Osborne recalled.
And over the decades the relationship with the Carter and the residents of Plains and Sumter County has grown “to a magnificent level,” Osborne said. “Jimmy and Rosalynn have done so many great things for me and my family over the past 30 years,” he continued. “Jimmy has endorsed my piano performances as ‘one of the greatest in the world pianists.’ The goodwill from Jimmy and Rosalynn cannot be measured.”
Osborne fondly recalled Carter’s 75th birthday celebration in 1999, at the Rylander Theatre in Americus which concided with the grand reopening of the renovated theater. “It was magnificent,” he said. “I had so much help for the event and it was great. I will forever love them and appreciate and treasure our friendship. They have mentored me and loved my family and I cannot show my appreciation enough! I love them for everything they stand for and what they do for the world!”
Osborne performs concerts worldwide and is featured at the Bellagio Las Vegas as artist in residence. He has sold millions of recordings worldwide and has been featured on “Morning Joe” NBC and many other international television programs. His piano music is featured on Pandora Radio, Spotify, iTunes, and YouTube. David Osborne is in the top 20 on iTunes in the Philippines. He has won numerous awards at L.A. music awards. The last award was Concert Performer of the Year.