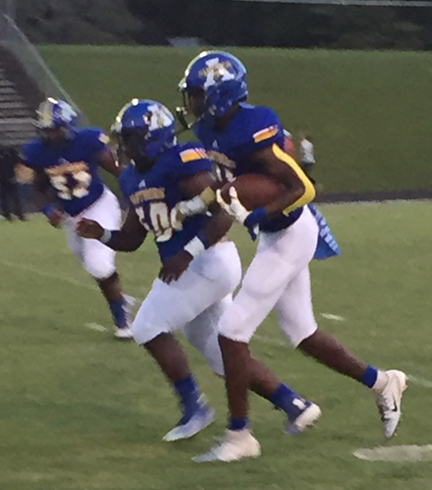 COLUMBUS – The Americus-Sumter Panthers (2-3, 2-1) lost a heart breaker Friday night when Hardaway field-goal kicker Zavier Clark nailed a field goal with 4.9 seconds left to give the Hawks a 23-20 win over Americus-Sumter.

Trailing 20-12 late in the game, Americus-Sumter found a way back. Quarterback KJ Harvey threw a swing pass to Montrellis Wilson, who scampered 77 yards for a touchdown, making the score 20-18 Hardaway. The Panthers attempted a two-point conversion, and Quevolia Willoughby was able to convert to tie the score at 20-20 with 1:45 left in the game. The Panthers were penalized on the ensuing kickoff and were forced to have to kick the ball from deeper in their own territory. The Hawks were able to move the ball into field-goal range for Clark. Then with 4.9 seconds left, Clark kicked the ball through the uprights to give Hardaway a 23-20 win.

“We missed tackles and we missed blocks on that drive,” Americus-Sumter Head Coach Larry Harold said. “We should not have allowed them (Hardaway) to make that drive for the field goal. Our players need to buy in to what the coaches are telling them.”

Hardaway’s first touchdown was scored by Tahjee Hudson. The PAT by Clark was good. Wilson scored the Panthers’ first touchdown of the game. However, the extra point attempt was no good, and ASH trailed 7-6. Javion Toney responded for the Hawks by scoring from 11 yards out. The extra point by Clark was good, and Hardaway led 14-6. The Panthers struck back when Quevolia Willoughby scored a touchdown to make the score 14-12. The Panthers tried a two-point conversion, but it failed. Both teams went into halftime with Hardaway leading 14-12.

The Hawks went back up by six when Ja’ron Early scored a touchdown. The extra point was no good, but Hardaway had a 20-12 lead.

However, the Panthers didn’t give up. With about two minutes left in the game, quarterback KJ Harvey threw a swing pass to Wilson, who ran 77 yards for a touchdown. Quevolia Willoughby scored on the two-point conversion to tie the game, but unfortunately, the Panthers couldn’t stop the Hawks’ game-winning drive. The Panthers struggled in the kicking game. They missed two extra points and a field-goal attempt, which proved to be costly.

The Panthers have next Friday night off to heal up and work on things that need to be corrected. On Friday, October 5, they will travel back up to Columbus to take on another region opponent: the Columbus Blue Devils. Kickoff is scheduled for 7:30 p.m.