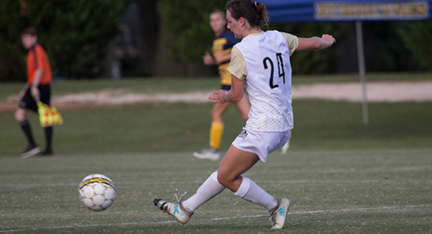 GSW sophomore defender Shannon Walsh with the ball for the Lady Hurricanes. Photo by Ken Gustafson

Georgia College (6-1-1, 1-1) scored their first goal in the 22nd minute when Amanda Bartholomew scored unassisted to put the Bobcats out in front 1-0. Seven minutes later, Anya Mancinelli scored with an assist from Bartholomew as her shot went into the bottom left corner of the net to give Georgia College a 2-0 lead at the half.

In the second half, GC continued to put pressure on the Lady Hurricanes. The Lady Bobcats scored three times within ten minutes. Bartholomew scored her second goal of the match in the 80th minute to increase GC’s lead to 3-0. Eight minutes later, both Sofia Lekas and Mancinelli scored to complete the 5-0 shutout of the Lady Hurricanes.

GSW falls to 2-5 overall and 0-2 in the Peach Belt Conference. The Lady Hurricanes had five total shots for the night, with Alisa Barr getting the only shot on goal. The Lady Bobcats took 42 shots during the game and 17 of those were on goal.

GSW will try to regroup as they return home for a midweek conference match against North Georgia on Wednesday, September 26. Kickoff is scheduled for 6 p.m.