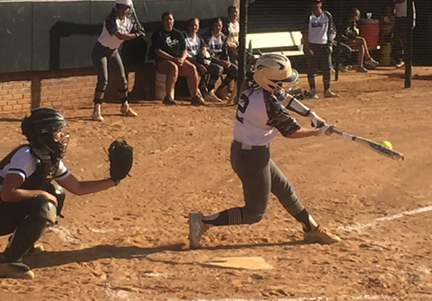 Schley County’s Landry Whaley went a combined 3-for-6 at the plate and drove in four RBIs in the Lady Wildcats’ double-header sweep over Baconton Charter. Photo by Ken Gustafson

ELLAVILLE – The Schley County Lady Wildcats used their bunting skills and their speed on the base paths to sweep Baconton Charter 9-2 and 10-2 in a double-header played at Schley County High School on Monday, September 24.

“We were able to bunt and run, which is a big part of who we are,” Schley County Head Coach Jody Sellars said. “We have a lot of speed…a lot of athletes. We were able to set everything up through bunting and running. We got some bunts down early and we stole a bunch of bases. Once we got a lead, I relaxed and let them swing the bat and we swung it pretty well today.”

In Game 1, Schley County got on the board first by scoring two runs in the bottom of the first inning. Alexis Bradshaw singled. Bradshaw then stole second base. Carmen Phillips then reached on an error, allowing Bradshaw to score the first run of the game. Phillips advanced to second on the error and would later steal third base.

After Emily Campbell struck out swinging, Nyiah Kelley Flew out to right field. Phillips ended up scoring on an error by the Baconton Charter third baseman. At that point, Schley County led 2-0. 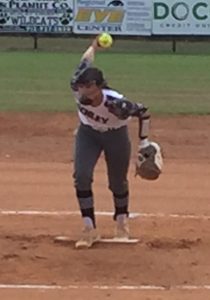 Schley County pitcher Saige Whaley gave up only two runs on two hits in the Lady Wildcats’ 9-2 win in Game 1 of a double-header.
Photo by Ken Gustafson

In the bottom of the third, Schley County added five more runs. Emily Campbell and Nyiah Kelley both singled. After Saige Whaley struck out, Perri DeVane was intentionally walked, loading the bases for Jade Sellars. Sellars drove in an RBI on a bunt fielder’s choice, making it 3-0 Schley County. Then Landry Whaley drilled a three-run triple to give the Lady Wildcats a 6-0 lead. Tamia Kelley then grounded into a fielder’s choice, scoring Kelli Rees, who came in as a courtesy runner for Whaley.

Schley County scored two more runs in the bottom of the fourth. Emily Campbell tripled to lead off the inning. Then Nyiah Kelley drove in Campbell on an RBI double. Kelley then advanced to third on a passed ball. After Saige Whaley drew a walk, Perri DeVane grounded into a fielder’s choice. DeVane was thrown out at second trying to steal, but Kelley was able to steal home to give the Lady Wildcats a 9-0 lead. 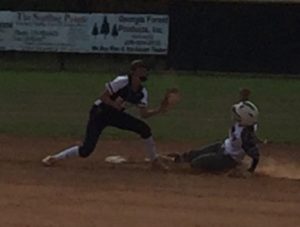 The Lady Blazers got on the board when Blake Singletary hit a two-run home run in the top of the fifth, but that would be all the offense Baconton could muster.

Hannah Crawford came on in relief of Whaley. Crawford pitched two innings, giving up no runs on one hit. 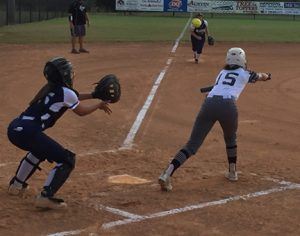 Tamia Kelley tries to lay down a bunt for the Lady Wildcats.
Photo by Ken Gustafson

In Game 2, Baconton Charter got on the board first. Lead-off hitter Blake Singletary was hit by a pitch to start the game by Schley County starter Perri DeVane. Lenzie Vickers then drew a walk, putting runners on first and second with nobody out. Singletary then advanced to third on a passed ball. Sara Culp then grounded out to third for the first out. Sarah Harper hit a sacrifice fly, scoring Singletary to give the Lady Blazers a 1-0 lead. The Lady Blazers got one more run in the fourth. However, that would be the all they could get. The Lady Wildcats scored two runs on three hits in the bottom of the first. Alexis Bradshaw and Emily Campbell both singled and scored in the inning.

Schley County scored three runs in the second and four in the third to break the game open. In the bottom of the third, Jade Sellars, Landry Whaley and Tamia Kelley each belted RBI doubles. The Lady Wildcats got their final run of Game 2 in the bottom of the fifth. At this point, Coach Sellars brought in some reserve players and they were productive. Darden Campbell, the younger sister of Emily Campbell, drew a walk to begin the inning. Campbell then advanced to second base on a passed ball. Maddie Walker followed that up with an RBI single to finish the game and give the Lady Wildcats a 10-2 win. 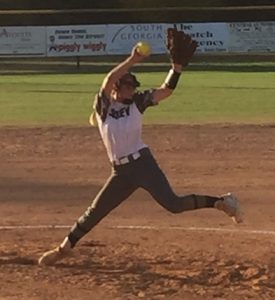 Schley County starting pitcher Perri DeVane gave up one run on three hits, walked one batter and struck out one another to lead the Lady Wildcats to a 10-2 victory over Baconton Charter in Game 2 of a double-header.
Photo by Ken Gustafson

Perri DeVane started in the circle for Schley County in Game 2. DeVane pitched three innings. She gave up one run on three hits. She walked one and struck out one. Hannah Crawford came on in relief for DeVane. Crawford pitched the final two innings, giving up one run on two hits.

In spite of the lopsided wins, Coach Sellars has great respect for Baconton Charter’s team. “They’re a quality team,” Sellars said. “They’re in the driver’s seat in their region. They’re going to win their region.”

Schley County returns to region play on Tuesday, September 25, when they host Hawkinsville. First pitch is scheduled for 5 p.m.