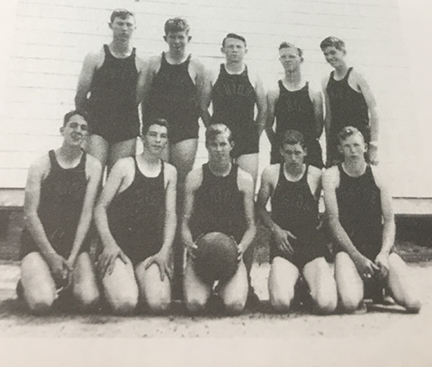 This is a picture of the 1946-47 Union High School boys’ basketball team. A year later, many of these players would be on the team that went 22-3. Standing left to right: Thomas Harrell, Roland Cheek, Thomas Holman, Donald Holman, Howard Stanford. Kneeling left to right: William Taylor, David Williamson, Fred Dalton, Ray Bass and Billy Clark. Photo by Thomas Holman

Union High School was located in nearby Leslie. According to writer and researcher Lonnie H. Duke, back in the ‘40s, ‘50s, and ‘60s, Union had an excellent boys’ basketball team. Duke has written a book entitled “Union High School: Boys Basketball in the Fifties and Sixties.” The book chronicles the basketball history of Union High School, as well as other schools in the area during that time. Back in the late ‘40s, ‘50s, and ‘60s, some good, competitive basketball was played at schools such as Union, Montezuma and other schools that have long-since consolidated with others to become the schools of today.

According to Duke, the 1947-48 Union High School boys’ basketball team had a memorable season that year. According to Duke, Dwight Compton was in his second year as the head basketball coach for both the boys’ and girls’ teams. The 1947-48 UHS boys team was loaded with seniors. Five seniors were in the starting lineup, and it was that way for most of the season. Ray Bass and Thomas Holman were the forwards. Roland Cheek was at center, and Fred Dalton and Howard Stanford were the guards. Union that year was a very deep team. The players on the bench could start for other teams. That year, Union started the season out red-hot, winning their first five games. They went on to finish the regular season at 22-3.

The biggest game of the year occurred on Friday, Jan. 16 in Leslie. In their first meeting against the Aztecs of Montezuma, Union lost. According to Duke, Montezuma (now Macon County) had a tremendous boys’ basketball program for several years. However, the outcome of Union’s second meeting against Montezuma was different. The Yellow Jackets defeated the Aztecs 36-33 to earn bragging rights in the area. With that win, Union improved to 17-2. Bass and Cheek each had 13 points on the night for Union. Having finished the regular season with a 22-3 record, the Yellow Jackets earned a number-one seed in the Central Division Tournament, which was played in Leslie.

According to research done by Duke, back then, the GHSA divided the schools located south of Macon and west towards the Alabama state line into four divisions: Western, Central, Eastern and Northern. Union was in the Central Division, along with Arabi, Vienna, Warwick, Plains, Leesburg (now Lee County), Ashburn, West Crisp and East Crisp.

The 1948 Central Division Boys’ Tournament was held in Leslie Feb. 10-13. Union, having been awarded the number-one seed, drew a bye in the first round. They didn’t play until Feb. 12. Union made it to the championship game, but lost to West Crisp.

Duke writes that Union still qualified for the District 3-C Tournament, which was also played in Leslie Feb. 18-21. To go to Macon for the State Tournament, Union had to win the District 3-C Tournament. The runner-up went home. On Feb. 13, Union defeated Stewart High 46-37. Ray Bass led the way with 23 points. This put Union into the District 3-C semifinals. They would be playing mighty Montezuma. Duke writes that Montezuma had a reputation to uphold. The Aztecs defeated Union 43-36. Ray Bass had another terrific game, scoring 25 points for the Yellow Jackets, but Union came up short. According to Duke, an unfortunate incident took place during the game to make things worse for Union. Roland Cheek was elbowed in the nose by Montezuma’s Sonny Nelson. As a result, Cheek ended up with a broken nose.

Chester defeated Bonaire High School in the other semifinal game 48-36. Union had to settle for playing a meaningless consolation game. According to Duke, the outcome of that game is unknown.

Montezuma went on to win the state championship that year. They defeated Portal in the title game 27-25. According to Duke, Montezuma was a perennial power in the state back then and on through the fifties. Between 1946 and 1953, the Aztecs went to the state finals six times. From 1946 to 1950, Montezuma made it to the state finals five years in a row. They won it once, defeating Portal 27-25 in 1948. Montezuma would later become what is known today as Macon County High School.

One of the coaches who coached basketball and baseball at Union is still coaching today. Doug Parrish coached the UHS Baseball Team from 1961-63. He also coached both the boys’ and girls’ basketball teams at Union during that same time period. Today, he serves as an assistant coach for the Southland Academy varsity football team. 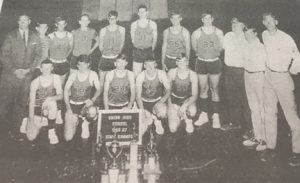 In the mid-‘60s, Union was at the pinnacle of high school basketball in Georgia. The Yellow Jackets won the state championship during the 1966-67 season. In the championship game, they defeated Greenville 58-48. In his book, Duke writes that sometime before the game, Union Head Coach Ben Hill Strickland made this comment: “We thresh peanuts in South Georgia.” Strickland was referring to Greenville’s outstanding sophomore player, Robert “Peanut” Murphy. Duke writes that Murphy turned in a fine performance and was named the tournament’s MVP. However, Union won the game and the state championship. It was the Yellow Jackets’ only state title in basketball in the school’s history. The players on that team were Jimmy Walls, Steve Fulghum, Junior Wilson, Ernie Magee, Bill Clingenpeel, Ed Faircloth, Joe Fulghum, Jimmy Nelson, Tommy Cheek, David Williams, Bobby Walters, Donnie Deriso, Jerry Toms, Stan Strickland, Larry Bass, Greg Carnes, and James Williams.

Union, along with other schools that consolidated into the schools of today, helped lay the ground work for the athletic tradition that is enjoyed today in Sumter County and the surrounding areas.