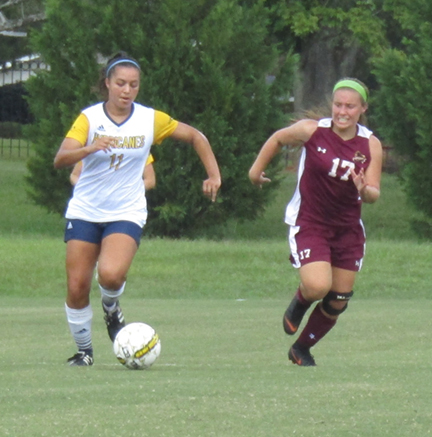 AMERICUS – The GSW Lady Hurricanes Soccer Team stepped out of conference and hosted Shaw University (6-0) on Wednesday, October 3, at Hurricane Field. Unfortunately for GSW, they ran into a tough, undefeated Shaw team that dominated possession for most of the match and defeated the Lady Hurricanes 4-0.

GSW is now 2-8 overall and 0-4 in the Peach Belt Conference.

“Everything was hard to day based on numbers,” GSW Head Coach Enrique Rodriguez said. “We tried to do the best we could, but it didn’t go our way.”

Later in the half, GSW junior midfielder Alison Rugel took a shot on goal, but the shot was saved by Shaw sophomore goalkeeper Shianne Duplantis. Both teams would go into halftime with Shaw leading 2-0. 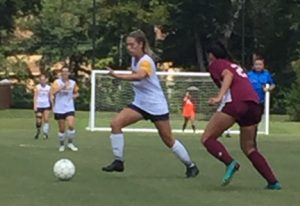 GSW senior midfielder Shelbie Mills with the ball for the Lady Hurricanes against Shaw.
Photo by Ken Gustafson

In the 55th minute, Shaw freshman forward Jasa Curry scored the first of her two second-half goals to make the score 3-0 Shaw. Then in the 60th minute, Curry scored again, completing the Lady Bears’ scoring and earning them the 4-0 win. 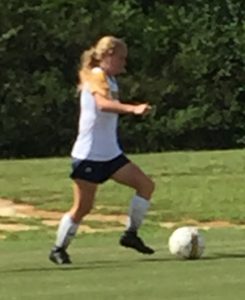 GSW junior midfielder Michelle Gustavsen advancing the ball up the sideline for the Lady Hurricanes.
Photo by Ken Gustafson

The Lady Hurricanes fought extremely hard during the entire match and tried to get into the scoring column. GSW senior midfielder Shelbie Mills took a shot on goal, but Duplantis was there for the save. Mills later tried to cross the ball in front of the Shaw goal mouth, but no one was there for the put-in. Early in the first half, when the score was 0-0, sophomore midfielder Leila Hamed took a shot on goal, but it went wide left of the net.

GSW junior goalkeeper Alina Rodriguez had six saves on the day for the Lady Hurricanes, while Duplantis had eight for Shaw. GSW outshot the Lady Bears 23-13 for the match. Alina Rodriguez told the Americus Times-Recorder that the problem with the Lady Hurricanes’ play on the pitch seems to be a communication issue. “I guess we need to work better as a team and we need to communicate more,” Rodriguez said. “I think we did a pretty decent job at it. Working together more would help out.” 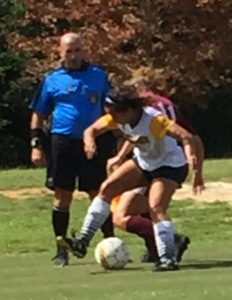 The Lady Hurricanes will try to break a seven-game losing streak when they travel up to the North Georgia Mountains on Saturday, October 6, to take on Peach Belt Conference opponent Young Harris College. The Lady Mountain Lions are 3-5 overall and 1-3 in the PBC. Kickoff is scheduled for 3 p.m.