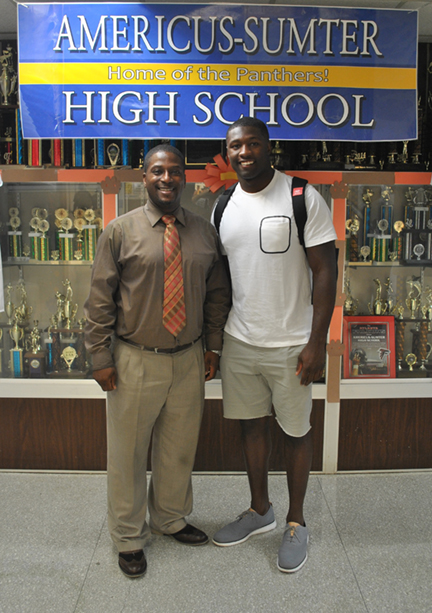 AMERICUS – One of this area’s best-ever high school football players, Roquan Smith, recently visited Americus-Sumter High School on Wednesday, October 3. A native of Montezuma, GA, Smith was a star linebacker at Macon County High School, where he was coached by current Americus-Sumter Head Football Coach Larry Harold. Smith went on to be a standout linebacker for the Georgia Bulldogs and was the MVP of the 2017 SEC Championship Game. According to Wikipedia, while playing for the Bulldogs, Smith was a Consensus All-American in 2017 and won the Butkus Award in 2017 as well. The award goes to the nation’s best linebacker. Smith was a first-round draft pick of the Chicago Bears in the 2018 NFL Draft.

Smith stopped by Americus-Sumter High School to meet with Coach Harold and some of the ASH players.