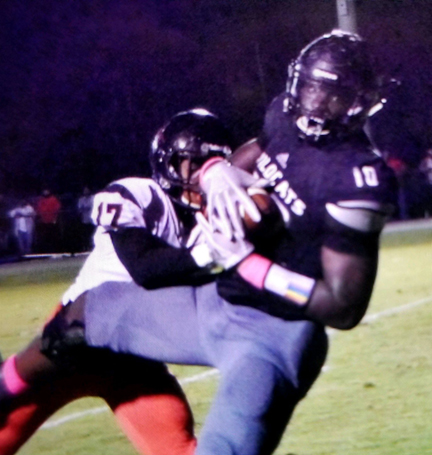 The Bulldogs took a 7-0 lead with 1:11 left in the first quarter. However, the Wildcats responded in the second quarter by moving the ball down to the Macon County 24-yard line. Sampson then scored his first rushing touchdown from 24 yards out. William Blackwell’s extra point was good, and the game was tied at 7-7 with 11:41 left in the half.

The Wildcats took the lead with 10:22 left in the half when Zamon Ross scored the first of his two rushing touchdowns from three yards out. Schley County Head Coach Darren Alford decided to go for two points, and Sampson scored on the two-point attempt to give Schley County a 15-7 lead. 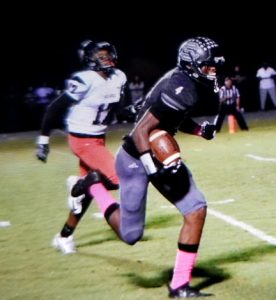 The Schley County defense continued to hold the Bulldogs’ offense in check. Then with 2:14 left in the first half, the Wildcats struck again when quarterback Garrett Peavy threw a 26-yard touchdown pass to Zykevious Walker. Ross scored on another two-point conversion attempt to increase Schley County’s lead to 23-7.

Macon County was able to score a touchdown and a two-point conversion to climb back to within eight points with 31 seconds left in the half. However, that would be the last time the Bulldogs would score any points for the rest of the game.

With 10:41 to go in the game, Peavy led the Wildcat offense all the way down to the Bulldogs’ four-yard line. From there, Sampson scored his second rushing touchdown of the game. Blackwell’s PAT was good, and the Wildcats led 30-15.

With 1:07 to go in the game, the Wildcats put the icing on the cake. Ross ran the ball 32 yards for his second rushing touchdown of the game. Blackwell’s PAT was good, and the Wildcats won the game 37-15.

Sampson rushed for 154 yards on 24 carries and scored two touchdowns. Ross had 23 carries for 141 yards and two touchdowns on the night. Garrett Peavy was 1-for-4 for 26 yards and threw one touchdown pass. Zykevious Walker had one reception on the night, but that reception was a 26-yard touchdown. On defense, Trent Bivins had eight total tackles to lead the Wildcat defense. Seven of those tackles were solo tackles. Zykevious Walker led the Wildcats in sacks with 2.5. Those sacks were for a total loss of nine yards.

The Wildcats will continue region play next Friday night when they host Crawford County on Homecoming Night. Kickoff is scheduled for 7:30 p.m.

AMERICUS – The Southland Academy Raiders (6-1, 2-0) won their second region game in a row when they defeated Valwood... read more