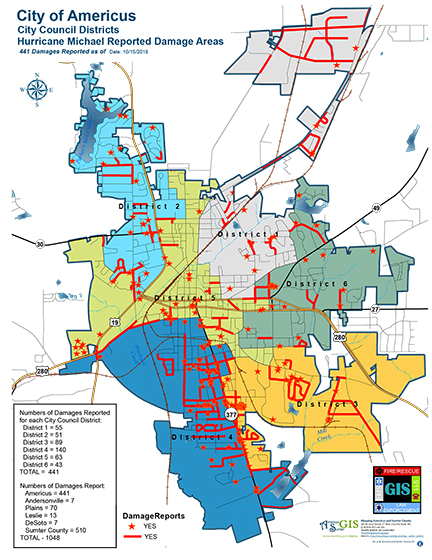 AMERICUS — As people continue the cleanup process from Hurricane Michael, the Americus city council voted unanimously Monday to waive permit fees for 120 days, and to have storm debris removed for the next 30 days. But the debris collection has caveats.
Larry Riner, city Public Works director, gave some guidelines for debris collection, all of which are part of the city’s code of ordinances.
• Small debris such as small limbs, pine cones, pine straw and leaves can be collected and placed at the curb of the residence for collection.
• Limbs and yard trimmings cannot exceed 5 inches in diameter and can be no more than 5 ft. long.
• Limbs and yard trimmings measuring from 5 to 12 inches in diameter must be cut to no more than 1 ft. long.
• No limbs or yard trimmings larger than 12 inches in diameter will be picked up by the city or any entity the city has contracted.
• Yard trimmings and limbs from vacant lots will be picked up, but only when such debris is generated from the vacant lot.
• Yard waste bags or containers must be placed at least 6 ft. away from vehicles, trees, poles, fences, mailboxes, fire hydrants, low-hanging trees, limbs, branches, power lines, guy wires, or other obstructions.
• Lawn services and contractors are responsible for bagging the yard waste and other waste they generate and disposing of it.
• Grass clippings, weeds, leaves, and other small yard waste materials must be bagged or placed in a container with a lid prior to being placed on the curb for pickup.
• Yard waste bags may be placed in the right of way, the street pavement or in roadside ditches as long as the flow of water or flow of traffic is not inhibited or changed.
• It is unlawful to place or mix yard trimmings with municipal solid waste within the city.
• It is unlawful to dump any solid waste on any property, in any waters or in any storm water collection system.
• It is unlawful to place any litter, trash, trees, grass, or other rubbish over or within 5 ft. of a storm drain, drop inlet, culvert or manhole.
• No person shall leave outside any building or in a place accessible to children any appliance, refrigerator, freezer, or other container which has an airtight snap lock or similar device without first removing the door.
The city, which is contracted with Advance Disposal for garbage collection, will use a subcontractor which specializes in storm debris collection, F5 Hauling, at a cost of $20 per cubic yard. The city will be reimbursed for 75 percent of the cost by FEMA for all debris removed within 30 days. 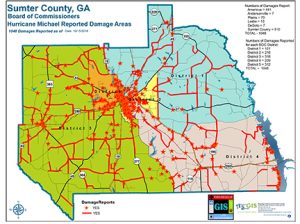 The Sumter County Board of Commissioners voted last week to allow citizens to place storm debris on the county’s right of way for collection.
In other business, during its agenda setting session held Monday (moved from last Thursday), the mayor and city council discussed other items.
• They unanimously approved the contract for LMIG street paving projects which includes Belinda Circle, International Boulevard, South Jackson Street and Winchester Street with a built-in contingency at a bid price of $ 496,040. The funds will come from unspent LMIG funds from 2016, 2017, and 2018, and a 10 percent match from the TSPLOST. Any leftover funds will be used to pave other streets in the city.
• Nigel Poole, Sumter County EMA director, gave a briefing on damages from Hurricane Michael. (See maps). He said he doesn’t anticipate any individual assistance from FEMA because “what we were hit with is nothing compared to those south of us.” He expressed his appreciation for the city’s team in the hours before, during and since the hurricane. Americus Fire & Emergency Services Chief Roger Bivins said his department received between 150 and 200 calls Thursday after the storm passed. Poole said the Regional E911 Center’s lines went down around 4 a.m. Thursday and all calls were directed to his cell phone from all eight counties in the region. The calls were logged and he dispatched various agencies such as EMS, police and fire.
It was reiterated that the city has a no-burn policy in effect. No one can legally burn anything outdoors.
• Larry Riner also briefed the mayor and council on the post-closure of a county landfill several years ago. He said after a recent meeting with county officials, there are some maintenance issues associated with the closure. He said the state EPD has visited but there is no consent order yet. The landfill has recently been surveyed, he said, and the county is seeking an RFQ for engineering services for this type of project. Riner said the cost could be between $200,000 to $600,000 and being that the city used most of the space in the landfill, the city’s share will be 67 percent. He explained that the county has to spend money first in order to be reimbursed.