Hundreds of linemen line up at the breakfast tent on the South Georgia Technical College Americus Campus.

AMERICUS — South Georgia Technical College (SGTC) in Americus was host to nearly 700 electrical line workers and support crews from across the country for nearly 120 hours after Hurricane Michael roared through Georgia leaving destruction and downed power lines in its path.
When it appeared that Hurricane Michael was headed toward Sumter County, SGTC Board member and Georgia Power local manager, Don Porter contacted SGTC President John Watford, Ed.D., about using the SGTC campus as a staging area for the line workers and their equipment while they converged on Sumter County and the surrounding areas to help restore power to their customers affected by the storm.
“South Georgia Technical College has an agreement that allows our campus to be utilized in the event of a disaster. We have partnered with Georgia Power before and we were certainly glad to provide a secure area for their employees and support staff to eat, sleep, and refuel while they were working to restore power and order to the people affected by the Hurricane,” said Watford.
“There were crews from Georgia, Florida, Ohio, Kentucky, Tennessee, Alabama, and other states. It was an amazing operation. They were able to come in here and set up headquarters, and provide hot meals to those 700 individuals as well as refuel their trucks and provide showers, and sleeping accommodations. We were certainly glad to be a small part of their restoration efforts,” said Watford.
The power crews utilized the Griffin Bell Aerospace Technology building and parking lot, the commercial truck driving range, the area behind the Energy and Transportation Center building and the main corridors in and out of the campus. Georgia State Patrol officials also utilized dorm rooms during the crisis.
Nearly 400,000 individuals were left without power in Georgia after Hurricane Michael fled Florida and came into Georgia. By Monday, Georgia Power had restored power to 97 percent of those impacted by Hurricane Michael. The company had more than 5,800 personnel working around the clock to restore power for the customers located in the hardest hit areas of Southwest Georgia. All of Georgia Power’s resources were dedicated to storm restoration efforts in the state along with additional resources from assisting utilities.
Georgia Power estimates that damage from Hurricane Michael included more than 3,500 spans of wire down (or over 130 miles), approximately 1,000 broken or damaged power poles, more than 900 fallen trees and more than 200 transformers damaged. 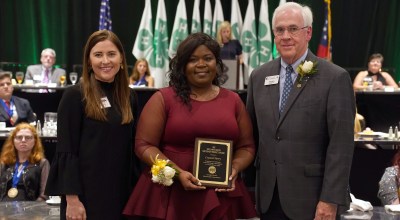