Saige Whaley a major factor in Wildcats’ sweep over Hawkinsville 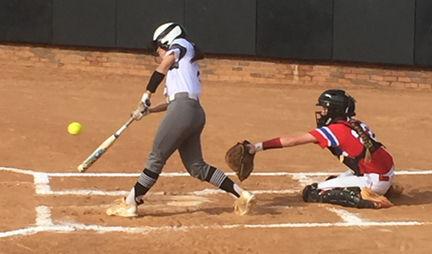 Schley County pitcher Saige Whaley belted two two-run home runs to lead the Wildcats to a 14-4 win in Game 2 over Hawkinsville to sweep the Red Devils and move on to the Elite eight of the GHSA Class A-Public State Tournament. Photo by Ken Gustafson

ELLAVILLE – Schley County pitcher Saige Whaley did it in the circle and at the plate. Whaley pitched the Schley County Wildcats to an 11-5 win over Hawkinsville in Game 1 and belted two two-run homers in a 14-4 win in Game 2 to sweep the Red Devils on Wednesday, October 17, at Schley County High School. The two-game sweep vaults Schley County into the quarterfinals of the GHSA Class A-Public School State Tournament. 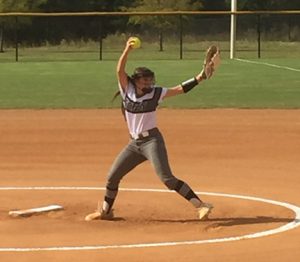 Saige Whaley gave up no runs and only two hits in the Wildcats’ 14-4 win in Game 2.
Photo by Ken Gustafson

Coach Sellars was referring to the Wildcats’ 4-3 win over Hawkinsville on Thursday, August 23. That game went eight innings. The second time the two teams played during the regular season, Hawkinsville won 4-2 on Tuesday, September 25.

In Game 1 of the playoff series, Hawkinsville scored two runs in the top of the first inning. Ashanti Edwards and Sam Lancaster both drew walks. Then Nadia Sloan hit a double, driving in two runs. In the bottom of the first inning, the Wildcats had runners at first and second with two outs, but Saige Whaley hit into a fielder’s choice to end the inning. 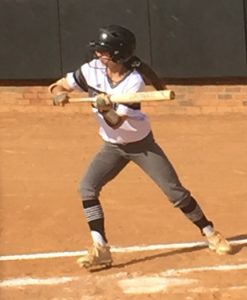 The Red Devils scored another run in the top of the second to give themselves a 3-0 lead. However, Schley County came to life in their half of the second. Landry Whaley led off with a walk and Perri DeVane reached on an error. Jade Sellars then laid down a bunt and reached on an error by the Hawkinsville first baseman. Tamia Kelley then singled in two runs, followed by a bunt single by Alexis Bradshaw. Carmen Phillips drove in an RBI on a fielder’s choice. Then Emily Campbell belted a two-run double. This was followed by an RBI single by Nyiah Kelley. After Saige Whaley struck out for the second out of the inning, her sister, Landry Whaley, drove in two more runs on a double. In total, the Wildcats scored seven runs on five hits and took advantage of two Hawkinsville errors in the bottom of the second inning. At this point, the Wildcats led 7-3. 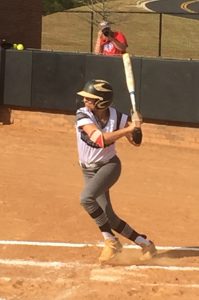 Schley County shortstop Carmen Phillips went 2-for-4 at the plate and scored three runs in the Wildcats’ 14-4 win in Game 2.
Photo by Ken Gustafson

Hawkinsville added a run in the top of the third inning. However, the Wildcats responded in their half of the third. With two outs, Bradshaw singled, then stole both second and third base. Phillips singled in Bradshaw to give Schley County an 8-4 lead.

Both teams had a runner in scoring position in the fourth inning, but neither team could score. In the bottom of the fifth, the Wildcats added two more runs. Jade Sellars and Tamia Kelley both got hits to lead off the inning. Bradshaw hit a sacrifice fly, scoring Sellars from third to give Schley County a 10-4 lead. Carmen Phillips bunted into a fielder’s choice, but Kelley scored on the play. 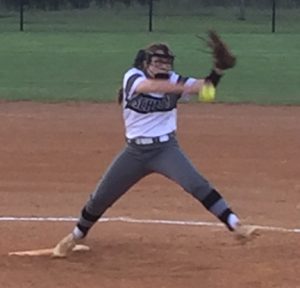 Hannah Crawford started in the circle for Schley County in Game 2 against Hawkinsville.
Photo by Ken Gustafson

Hawkinsville scored their final run of Game 1 in the top of the sixth. In the bottom of the inning, the Wildcats scored their final run of the game. With two outs, Jade Sellars singled and stole second base. Tamia Kelley then drove in Sellars on an RBI single. Saige Whaley was able to get the final three outs in the top of the seventh to seal the 11-5 victory for the Wildcats in Game 1. 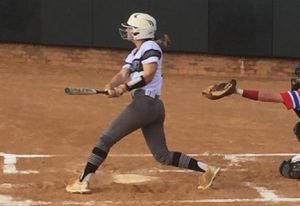 Danielle Powers, the starting pitcher for Hawkinsville in both games, gave up 11 runs on 12 hits in Game 1. Four of those runs were earned. Powers walked one batter and struck out three.

The Wildcats only needed to win Game 2 to assure themselves a spot in the Elite eight (state quarterfinals). They would be the visiting team in the second game. With one out, Carmen Phillips singled in the top of the first. Then Emily Campbell reached on an error, allowing Phillips to come around and score. The error allowed Campbell to make it to third base. Nyiah Kelley hit a sacrifice fly, scoring Campbell to give the Wildcats an early 2-0 lead. 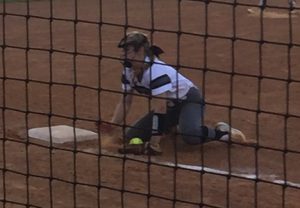 The Wildcats scored their third run of Game 2 in the top of the second inning. With one out, Perri DeVane doubled. After Jade Sellars grounded out, Tamia Kelley drove in DeVane on an RBI single.

Hawkinsville responded in the bottom of the second with four runs to take a 4-3 lead. They took advantage of four errors committed by the Wildcats. However, that would be the last time the Red Devils would score in Game 2. 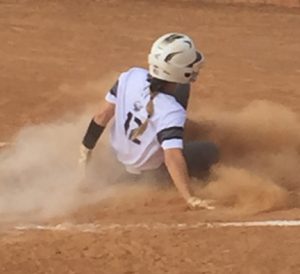 In the top of the third, the Wildcats plated three runs on two hits and took advantage of three Hawkinsville errors. Emily Campbell and Nyiah Kelley both singled, and Saige Whaley reached on an error by Powers. Campbell, Kelley and Whaley all scored in the inning. At that point, the Wildcats led 6-4. 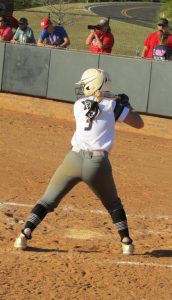 Whaley went 2-for-4 in Game 2 with four RBIs. All of those RBIs came on the two-two-run home runs. Emily Campbell went 3-for-4 at the plate and scored three runs. Carmen Phillips went 2-for-4 and scored three runs. Nyiah Kelley was also productive at the plate. Kelley went 1-for-4, scored two runs and drove in four RBIs. “We swung the bat along with bunting and put some pressure on them,” Coach Sellars said. “We ran the bases and got them to kick it around a little bit. We got some timely hits. That was really the reason for our success.” 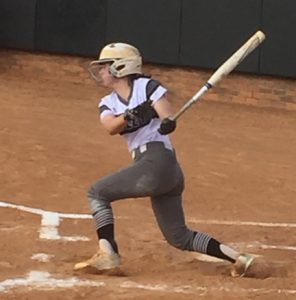 Hannah Crawford started in the circle for the Wildcats in Game 2. Crawford pitched the first two innings, giving up four runs on three hits. She walked one and struck out one. Saige Whaley came on in relief of Crawford in the third. Whaley only gave up two hits. She walked one batter and struck out two. “Saige pitched really well as well,” Coach Sellars said. “I can’t say enough about what she did in the circle. I thought Crawford did a good job throwing in Game 2. We just didn’t make many plays behind her. We had that one inning where we made four errors in a row. Had we not done that, she probably would have continued pitching. I felt like I had to make a change and go back to Saige. She did a great job all the way around. I can’t say enough about the team though. They’ve come a long way. It’s going to be fun in Columbus.” 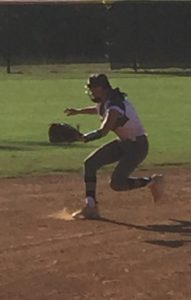 The Wildcats will indeed travel to Columbus, GA for the state quarterfinals. They will face perennial power Gordon Lee on Thursday, October 25, at 9 a.m. The Trojans have won the GHSA Class A-Public School State Championship three years in a row. They knocked the Wildcats out of the state tournament a year ago. “They’re the number-one seed. They’re a power house. They’re an elite team. That having been said, we’re not scared of them. I feel like we have the recipe to give them a fit. If we go up there and do what we do and execute, I think we can play with them.”