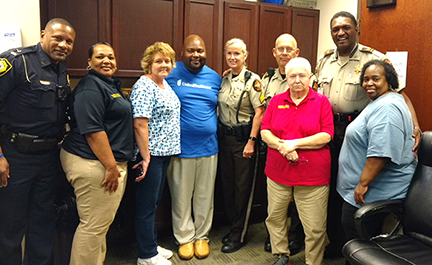 AMERICUS — Brandon Simpson of Atlanta received one of Jody Smith’s kidneys, and met Smith’s mother here Tuesday.
Georgia Southwestern State University Police Officer Jody Smith died, along with his best friend, Americus Police Officer Nick Smarr in December 2016. The two were shot on Dec. 7, 2016, while responding to a domestic call. Smarr died at the scene, and Smith, an organ donor, died the following day.
Simpson, 37, grew up in Americus and was here visiting relatives in the area on Tuesday when he stopped by his former employer, Tyson Foods in Dooly County. There he ran into his former supervisor, Selena Bobb Bryant, who is married to Sumter County Sheriff’s Chief Deputy Col. Eric Bryant. Jody Smith’s mother, Sgt. Sharron Johnson, is also a deputy in the civil division. While visiting with Selena Bryant Tuesday, Simpson mentioned his kidney transplant and said he knew who the kidney had come from. She urged him to contact her husband so he could meet Sharron Johnson.
“I had wanted to do something for some time,” Simpson said in a phone interview with the Times-Recorder. “In my mind, I wanted to do something big, but it never happened. Then the chance comes and I wanted to be dressed a certain way, so I got a haircut, called Eric Bryant and went to the courthouse, taking my aunt along.”
Col. Bryant took Simpson into the rear entrance of the Sumter County Courthouse and introduced him to Sharron Johnson, who smiled and said, “I know Brandon. He’s carrying a part of my baby.”
Simpson said he was astonished that she knew his name even though they had never met. After her son’s death, Johnson had written a letter to LifeLine and the organization gave Simpson the letter. He said last names were redacted but he knew his kidney came from Jody Smith because the story had national exposure.
“I read the letter at my doctor’s office,” Simpson said. “I knew who the donor was!”
After hugging a lot, Simpson and Johnson talked awhile. “She said I had broad shoulders like her son did, and I told her I was OCD like he was,” Simpson said. “She was very open and receptive to me. She said she knows that organ donation is important and saves lives. She told me that her son got to live through me; that makes me feel good.”
Simpson said he and Johnson are now Facebook friends and chat through messenger. “I’ve made a friend for life,” he said.
Sharron Johnson’s was also asked about the experience of meeting Simpson.
“It was a privilege and honor to meet Brandon Simpson recipient of Jody’s right kidney,” she wrote. “A big thanks to Col. [Eric] Bryant who helped arrange to get us together on Tuesday at the Sumter County Courthouse. What a sweet surprise and blessing it was for me to meet this young man who I immediately was drawn to before even being introduced to him due to his warm demeanor and big pleasant smile.
“Well over a year ago I was approached by his Aunt Nannette to tell me that her nephew Brandon Simpson’s life was saved because of my son Jody. So, upon hearing Brandon’s name it hit me hard with a whole lot of emotions that I was meeting Brandon Simpson, the life that Jody saved, in person and that he was carrying a part of my baby. It took my breath for a second but Brandon gave it back to me with his big, warm hug like Jody’s.
“Naturally we cried but they were mainly tears of pride and happiness and I told him that he had a very special part and to please take care of it because it came from my baby boy, the best son a mother could have.
“Although our meeting was brief it left me complete, knowing a special life was saved because of my baby’s sacrifice.
“All I asked of Brandon was to spread God’s love and fulfill the purpose he has for him.
“Since our meeting, we have exchanged numbers and will no doubt stay in touch.
“Other than Brandon I have also had the honor of meeting the family of one other recipient of Jody’s lungs via social media and phone. There are several other lives that Jody saved and I hope to meet them all one day.”
Simpson is an Americus native and graduated from Americus High School in 1999. He was diagnosed with end stage renal disease in 2008, and was dialyzed three times a week until December 2016, when he got the call. On Dec. 10, he had received a call from Piedmont Hospital, with questions about his labs. He said he had been on the transplant list for some time and that type of call had never happened before. “I was at a friend’s Christmas party that Sunday night [Dec. 11] when I received a call. A kidney that matched had been found. I was told to dialyze and be at the hospital at 3 a.m.,” he said.
After undergoing a six-hour-plus surgery, Simpson’s life changed for the better. He said he has had no problems or issues and his laboratory results look good consistently.
Simpson hopes his and Jody Smith’s story will help others. “This experience has been very touching,” he said. “I’m still in shock and awe [at meeting Johnson]. I felt so good. There are lots of people waiting to get a transplant. They’re on dialysis, and I hope this gives them hope.”