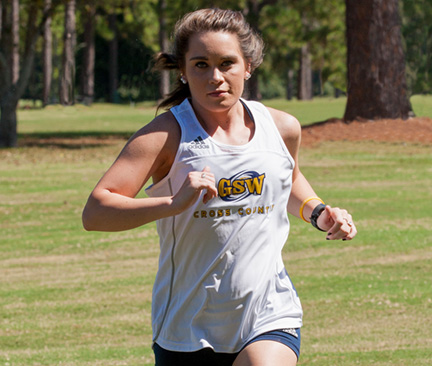 GSW cross country runner Savannah Ross finished the Bobcat Invitational Meet with a time of 26:10.4, putting her in 73rd place out of 141 competitors. Photo by GSW

The Lady Hurricanes finished 14th out of 19 schools who were in the competition.

McGarr was the first of the Lady Hurricanes to finish the race in a time of 25:03.3. That put her in 49th place out of 141 competitors. McGarr was one of two GSW runners who improved their times from the last time they participated in this race in 2016. McGarr was one minute and four seconds faster compared to two seasons ago.

Florida State took home the team title, finishing with 42 points. The Seminoles had five runners finish in the Top 12 of the individual standings. FSU edged out runner-up University of Alabama-Huntsville (54). In Cross Country, the team with the fewest points wins.

Justine Glass from the University of Montevallo (AL) won the race, finishing in first place overall with a time of 21:54.7.

The Lady Hurricanes will now turn their attention to the Peach Belt Conference Championships. The PBC Championships will be held on Saturday, November 3, at Redcliffe Plantation in Beech Island, SC. This is the same course the Lady Hurricanes ran earlier this fall at the Jaguar XC Invitational. In that competition, GSW finished in sixth place out of 10 teams.