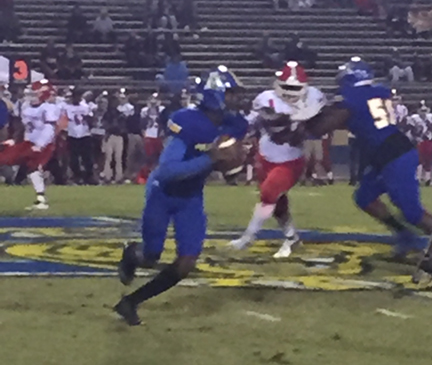 AMERICUS – The Panthers came into tonight’s Homecoming game against Westover facing what amounted to a must-win situation to get into the GHSA Class AAAA State Playoffs. Knowing this, Americus-Sumter came ready to play. Unfortunately, the Panthers struggled to stop the Patriots’ running game, and Westover won the game 28-12.

Penalties and turnovers by the Panthers also played a factor in the loss.

The Panthers got on the board first by way of their defense. The Patriots had the ball at the Americus-Sumter 30-yard line. On third-and-short, Westover quarterback Cameron Hopkins’ pass was intercepted by Lemario Larry, who ran the ball 70 yards the other way for a Panther touchdown. The extra point attempt by Alexis Vasquez was no good, but Americus-Sumter owned an early 6-0 lead with a little over seven minutes to go.

However, almost two minutes later, the Patriots had the ball at the Americus-Sumter 43. Hopkins threw a 43-yard touchdown pass to Anthony Jackson. The extra point by Collin Giovingo was good, giving Westover a 7-6 lead by the end of the first quarter.

Americus-Sumter defensive back Lemario Larry (5) is trying to shed a block. Larry scored a 70-yard touchdown on an interception.
Photo by Ken Gustafson

Both teams turned the ball over early in the second quarter, but the Patriots were able to move the ball down inside the 10-yard line. On first-and-goal from the eight, running back Johnuel Hicks ran the ball three yards down to the five. The Panther defense forced a fourth-and-goal situation from the one for Westover. However, the Patriots’ Ryan Flownory scored a touchdown. The extra point by Giovingo was good, and the Patriots led 14-6 with 5:02 to go in the first half.

The Panthers were not able to mount a drive on offense and were forced to punt. The Patriots got the ball in good field position at the ASH 34-yard line. 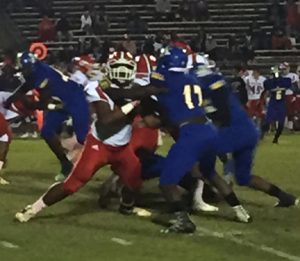 Westover was able to move the ball down inside the ASH 10-yard line. Westover running back Jonathan Mock would eventually score a touchdown. The extra point by Giovingo was good, and the Patriots led 21-6 at halftime. Kanova Willoughby rotated at quarterback with KJ Harvey in the first half.

The Panthers received the ball to start the second half, and Harvey led the ASH offense down to the three-yard line. Jacoby McCuller scored from three yards out. The Panthers decided to go for two, but the two-point conversion attempt failed, making the score 21-12 Westover. 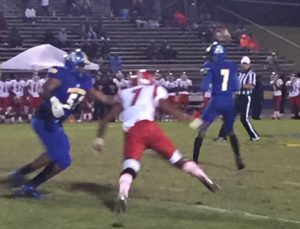 Kanova Willoughby (7) back to pass. Willoughby rotated with KJ Harvey at quarterback.
Photo by Ken Gustafson

Westover added another touchdown when running back Jamie Pettway scored from a few yards out. The extra point by Giovingo was good and the Patriots enjoyed a 28-12 lead.

The Panthers tried to get something going on offense, but the Westover defense stopped them on fourth down. The Patriots responded by moving the ball down to the eight-yard line. 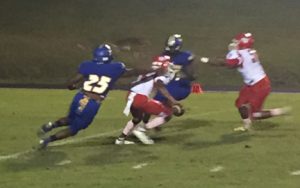 However, a bad snap by the Patriots’ center to Hopkins resulted in a huge loss of yardage, forcing a third-and-long. The Patriots got 17 yards on third down, forcing a fourth-and 17 from the ASH 17-yard line. Westover went for it on fourth down, but the attempt failed. Americus-Sumter got the ball back, but it was too little, too late as Westover left Alton Shell Stadium with a 28-12 win.

The Panthers will close out the regular season at hone when they take on Carver (Columbus) on Friday, November 2, at 7:30 p.m.