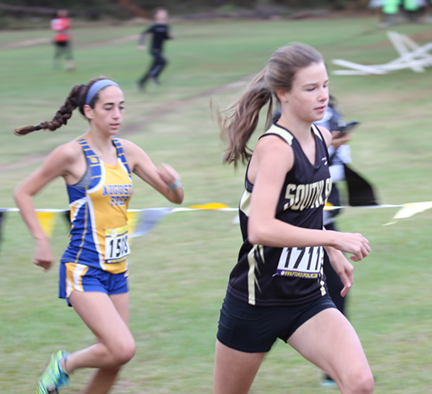 Freshman Elizabeth Law was the only Lady Raider to qualify for state. She finished 15th with a time of 21:49.56. Senior Karmen LeRoy of Trinity Christian-Dublin won the girls’ race and claimed the individual state title with a time of 19:25.30.

The top-10 runners received GISA All-State honors. Law finished a little less than a minute from the 10th spot. Junior Hadley Holt of Deerfield-Windsor finished in 10th place with a time of 20:56.22.

According to ga.milesplit.com, a total of 77 girls competed in the state meet. 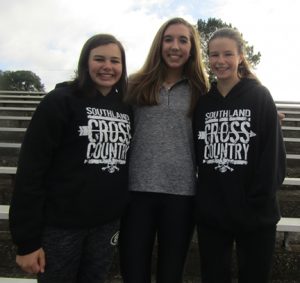 For Law, as well as the Southland male runners, the cold, windy conditions were a factor in the girls’ and boys’ races. “I ran the best that I could in the conditions and considering how I felt,” Law said. “I’m glad it’s over now.” 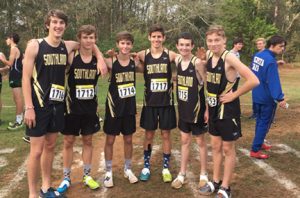 On the boys’ side, Southland had six runners that competed in the state meet. Of the six Southland runners that competed, Tanner Humphrey, an eighth grader, finished with the best place and time. Humphrey finished in 12th place with a time of 17:53.86. The top-10 runners receive GISA All-State honors. Humphrey was a little over nine seconds off 10th place. Senior Naol Hulufe of Cristo Rey Jesuit School in Atlanta finished in 10th place with a time of 17:44.73. Junior Porter Hill of Deerfield-Windsor was the individual state champion with a time of 16:54.53. 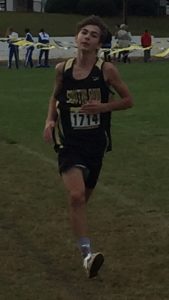 Southland runner Tanner Humphrey was the first Raider to cross the finish line in the GISA Class AAA Boys’ State Meet. He finished in 12th place with a time of 17:53.86.
Photo by Ken Gustafson

Humphrey mentioned that the course was really muddy and wet due to it raining a couple of days before the competition, but that the course had dried up on Friday, October 26, when the team was practicing. Humphrey also mentioned the fact that there were a lot of runners in the race, making it more challenging than the Region 3-AAA race a week ago. According to ga.milesplit.com, there were 101 competitors in the boys’ race. “There were a lot of people, a lot more than there were in the region race,” Humphrey said. “Last week in the region race, I ran an 18:50. My teammate, Max Foster, told us that our goal was to beat 18:00 this week. I got under 18:00.” 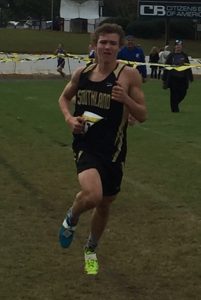 Southland’s Max Foster finished the state meet with a time of 18:39.95.
Photo by Ken Gustafson

Foster, a sophomore, was the next Southland runner to cross the finish line. He finished in 19th place with a time of 18:39.95. “The weather conditions were great to run in. It was cold,” Foster said. “The hardest part was how to pace yourself. You don’t want to go out too fast. You don’t want to go out too slow. I started out a little too slow and I didn’t get the time I wanted. I didn’t run as fast as I wanted to, but it was a good season.”

Junior Gray Torbert was the next Southland runner to cross the finish line. Torbert finished in 24th place with a time of 19:13.79. For Torbert, it was mostly about the mental aspect of the competition. “The biggest challenge for me was really mental,” Torbert said. “I was trying to tell myself that I can do my race and get the time I wanted and break 18:00, but I didn’t quite bring it today. However, I thought I ran really good. I just tried to do the best of my ability and I feel like I did that.”

Southland’s Gray Torbert finished the boys’ state meet in a time of 19:13.79.
Photo by Ken Gustafson

Freshman Matthew Peck, the next Southland runner to finish, crossed the line in a time of 22:12.09. For Peck, the biggest challenge for him, other than it being the state meet, was just trying to get ahead of people without having to use up all of his energy. “It’s a very delicate process,” Peck said. “In the middle of a race, you don’t have time to really rationalize things and form a plan. You just have to take it or not take it. It’s very difficult.” Peck said that the cold air on Saturday hurt him in the race. “When you breathe in cold air, it hurts your throat. That made it harder for me to breathe,” Peck said. In spite of the difficulties he had, Peck was able to run a personal best. 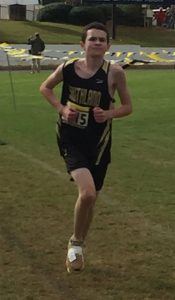 Southland runner Matthew Peck finished the state meet in a time of 22:12.09.
Photo by Ken Gustafson

Senior Gabe Roland finished his cross-country career in a strong way by crossing the finish line in a time of 22:24.45. Roland was out for the first eight weeks of the season due to a knee injury. “I’ve been back for three weeks now,” Roland said. The most challenging part of the race for Roland was knowing that he wasn’t going to be able to run as good of a time as he wanted to because he had only been practicing for three weeks. Considering the situation Roland was in, he ran a very good time for his last cross-country race at Southland. 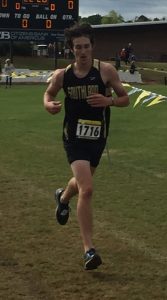 Freshman Hunter Hockman finished the race in a time of 23:05.69. For Hockman, the cold air was the biggest challenge for him in the race. “The cold air hurt me a bit,” Hockman said. “I was running and I wanted to just keep on going. I wanted to break 23:00 and I almost did it. I missed it by five seconds, but it was a good race.” 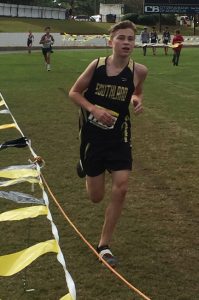 Southland freshman Hunter Hockman finished in a time of 23:05.69. He nearly made his goal of finishing in 23:00 or less.
Photo by Ken Gustafson

With several younger runners doing well for the Raiders this year, the future for the Southland girls and boys cross country programs looks very bright.