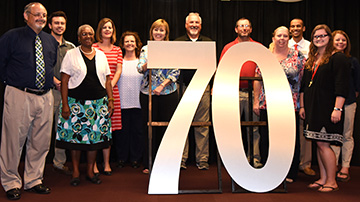 AMERICUS — The South Georgia Technical College (SGTC) Foundation kicked off its 19th annual TechForce fundraising drive and SGTC employees demonstrated their commitment to help students “Celebrate Success with South Georgia Tech” through their contributions and participation at a silent auction and luncheon held recently in the John M. Pope Industrial Technology Center on the Americus campus. South Georgia Technical College is celebrating its 70th anniversary this year.
Approximately 150 full- and part-time employees participated in the “Celebrate Success with South Georgia Tech” fundraising drive through payroll deduction donations, bids on silent auction items or through contributions to the Foundation as part of the internal portion of the TechForce 2018 kickoff drive.
SGTC employees also took part in “Celebrate Success with South Georgia Tech” email contests for several weeks leading up to the luncheon and silent auction in order to earn a spot in the luncheon’s “Through the Decades Trivia” game-show. During the email contest, employees were given clues and short music clips and had to guess the name of the song, the artist and when it was recorded.
The “Through the Decades Trivia” game was played on the day of the luncheon and four teams of four employees played for top prizes. There were trivia questions from each of the seven decades since South Georgia Tech was formed in 1948. The 16 individuals who competed for special prizes in the game show included: Tawanna Wright, David Kuipers, John Watford, Gloria Bell, Gwen Hall, Kelly Everett, Terri Battle, Sandhya Muljibhai, Kari Bodrey, Glenn Cobb, Don Rountree, Derek Stoops, April Hilliard, Christine Rundle, Melissa Grantham, and Kim Miller.
The team of Christin Rundle, Kelly Everett, Glynn Cobb and Deryk Stoops took first place followed closely by the team of David Kuipers, Terrie Battle, Sandy Muljibhai, and Don Rountree. Thurston Clary of Sumter Broadcasting provided music for the event during the silent auction and luncheon.
There was also a costume contest and employees could dress up as their favorite characters from any of the seven decades. Terri Smith took first place with her costume of Oscar the Grouch from Sesame Street and Deo Cochran was the runner-up with her Diana Ross costume and musical rendition.
Each year, the SGTC Foundation hosts a TechForce drive to raise funds for different programs and projects on the Americus and Crisp County Center campuses. The TechForce 2018 campaign is currently underway and the theme is “Celebrating Success with South Georgia Tech!”
All donations for equipment, scholarships, and textbooks during the SGTC Foundation TechForce 2018 fund drive will be matched dollar-for-dollar by the Technical College System of Georgia and through federal, state, and local various grants. This helps provide workforce development opportunities for students.
This year the foundation’s goal is to raise $300,000 to provide textbooks at no cost to students as well as scholarships for academically deserving and financially disadvantaged students and purchase state of the art equipment for the college’s aviation maintenance technology, electronics technology, and commercial truck driving programs.
“The South Georgia Technical College Foundation is a vital part of our college’s success,” explained SGTC President John Watford, Ed.D. “We appreciate the support that we receive from our employees and from the community through the foundation fund drives. Over 30 different programs have benefited directly from the past 18 TechForce drives with additional state-of-the-art equipment. The entire college and community have benefited from the scholarships and the use of free textbooks for students. These donations have also helped with the James Hall and Martin Hall dorm renovations and the renovations to the former DOAS Surplus Building which has been transformed into our general core classroom building as well as the John Deere TECH Agricultural Technology program. We appreciate the support of our boards, faculty, staff, and community partners for helping support success at South Georgia Tech.”
The TechForce 2018 fund drive has already gotten off to a good start with the help of employees, business and industry partners and local supporters who have donated items for the SGTC Foundation Internal TechForce drive, luncheon and silent auction. Each year nearly 100 percent of the SGTC employees contribute to the TechForce drive through payroll deduction or direct donations.
Approximately $550,000 of the over $4.75 million raised by the TechForce campaigns over the past 18 years has been donated by South Georgia Technical College faculty and staff.
Members of the SGTC Foundation and the SGTC board, as well as other volunteers, will be making contacts with community leaders asking for support of the fund drive again this year. Postcards and solicitation letters were sent out to community leaders asking for support. SGTC Foundation Trustee and Development Committee chairman John Argo is head of the TechForce 2018 drive for the Foundation.
The TechForce 2018 Internal Committee included: Co-chairs David Finley and Vanessa Wall, Shane Peaster, Leah Windham, Carrie Wilder, Teresa McCook, James Frey, Victoria Herron, Paul Fitzgerald, Matthew Burks, Gail Clary, Minnie Williamson, Tami Blount, Andrea Ingram, Michele Seay, Kierra Sparks, Nancy Fitzgerald, Andrea Oates, Faith Harnum, Don Rountree, and Chester Taylor.