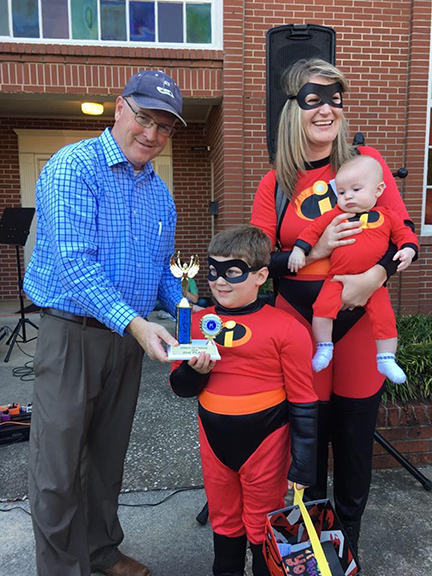 Second-place winners in the ‘Children Without Pets’ competition were Nolan Bodrey (age 5) and Conner Bodrey (four months) dressed as characters in ‘The Incredibles.’ Mom Melanie Nelms dressed up as Elastigirl. Cody King, Americus Kiwanis president, is shown presenting the award.

AMERICUS — Children dressed in all kinds of costumes, along with their parents and pets, marched and participated in the 71st annual Kiwanis Pet Parade and Downtown Trick or Treat on Tuesday.
Charlene Pennymon, chairman of the Kiwanis Pet Parade, said that several people registered for the parade and the trick or treat that followed. Registration began at 3:30 p.m. in front of the First Presbyterian Church on South Jackson Street, followed by the parade at 4 p.m.
“It’s kids coming out and celebrating, bringing their pets, dressing them up and getting everybody into the spirit of the season, starting with Halloween and trick or treating. It gives them a chance to dress up and have some fun,” Pennymon said.
Sam Peavy, an Americus Kiwanis Club past president, said the first Kiwanis Pet Parade was held in 1947. “We still have the very first costume winner, George [Henry] Teaford, still in our club,” Peavy said. According to Peavy, Teaford was just six years old when he participated in the inaugural Kiwanis Club Parade and won first place for his costume. He rode a mule in the parade. Teaford is a medical doctor here in Americus.
Both children and their pets were dressed up in costumes as the parade made its way through downtown Americus. Children dressed themselves up as super heroes, princesses and, of course, scary-looking creatures as well. They also dressed up their pets in costumes. Dogs, rabbits and even a guinea pig participated in the parade.
The parade route began at First Presbyterian Church on South Jackson Street.
After it was over, it was time for judging the costumes.
There were two categories: Children and their pets dressed up, and children dressed up without pets. The first-place winners for children and pets both dressed up were Henry and Abby Hart (ages 4 and 1). They were dressed as UPS drivers. Their pet was a Lab named Hambo, dressed in pink. Coming in second place was Mrs. Denise’s Daycare Center, run by Denise Lindsey. There were eight children, ages from nine months to four years old dressed as characters from the movie “Grease.” Their dog Reba was dressed in a poodle skirt.
The third-place winners were Karter Patrick, Mia Hughes and Blake Bass, dressed as circus characters. They had two pets: Bink, a black and grey Yorkshire Terrier, dressed as a clown, and Brodie, a black and white Sheltie, dressed as a lion.
In the competition involving children dressed without pets, Owen, Luke and Reid Williams won first place dressed as characters in “The Wizard of Oz.” Owen is six. Luke is three and Reid is five months.
The second-place winners were Nolan Bodrey (age 5) and Connor Bodrey (four months) dressed as characters in “The Incredibles.” Nolan was dressed as Dash and Conner as Jack. Their mother, Melanie Nelms, was dressed as Elastigirl.
The third-place winner went to nine-year-old Jossline Corpus as a pink skeleton.
Once the awards were given out, it was time for some trick or treating through the downtown area. Several businesses had people there to give out candy to the kids. The Americus Welcome Center had a group waiting to dispense delicious delights to the trick-or-treaters. There was also a group from the Americus Police Department with a booth along Forsyth where they were giving out candy as well.
It was a wonderful and safe time for the children, their parents and their pets as the downtown community totally embraced the Kiwanis Pet Parade participants and trick-or-treaters.