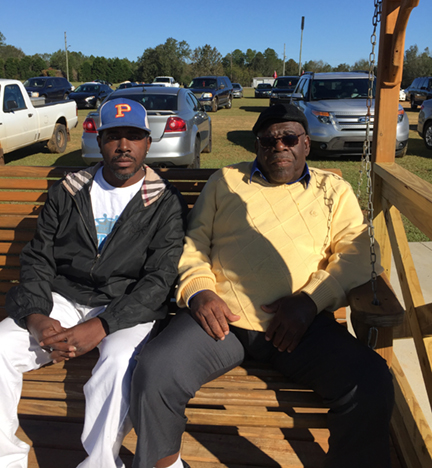 AMERICUS – Toby Rush was a standout athlete at Americus High School from 1989-93. He played football, baseball, basketball and ran track for the Panthers. On Saturday, November 3, he sat down with the Americus Times-Recorder to talk about his days as a student-athlete.

Unfortunately, during Rush’s years at Americus High, the Panthers didn’t win any region or state championships. “We fell a little short,” Rush said. “The region was played much differently than it is now. We had to play within our region to start with in the playoffs. We would always probably lose that second game in the playoffs before getting to the region championship.”

While he loved football, basketball and track, his first love was baseball. He played shortstop at Americus High, then went on to play college baseball at Abraham Baldwin Agricultural College (ABAC). “My freshman year there, we had a pretty good season. I think we finished fourth in our conference, but we didn’t advance any further,” Rush said. Rush went on to say that the year prior to him coming to ABAC, the ABAC baseball team made it to the Junior College World Series. Rush played baseball at ABAC from 1994 to 1995. Rush said that after he graduated from ABAC, he went into the military, but returned to baseball once he got out. “When I got out, I signed an independent league contract to a new league that started here in the South between Alabama, Florida and Georgia,” Rush said. ”The team was the Americus Arrows. We actually had an independent league team here. Myself and my brother, Travis Rush, got to play together on that team. It was the first time that we got to play together on any team because there’s a seven-year age difference. It was an historic moment for the two kids of Miller Rush to be on the same team at the same time.”

Rush has a lot of great memories playing high school sports at Americus High. Because of that, he had to think a little bit about what would he consider the most memorable moment. “There was a play I made in baseball. There was a line drive hit up the middle. It went off the pitcher,” Rush said. “I played shortstop, and the ball travelled to the second base side of the field, and I came all the way from deep shortstop, gloved the ball and shoveled it out of my glove to the first baseman. It has to be the most memorable play I ever made.”

His father, Miller Rush, reminded Toby about the punt return he made while playing football. The younger Rush agreed that the punt return was one of his greatest memories. “There’s a lot of them, but that baseball play would be at the top because it was something that nobody had ever seen before,” Rush said. “Even though the runner was called safe, it still is one of the best plays I ever made.”

As far as what his most memorable experience at ABAC was, Rush said that it was the very first college game he played in. “Being on a college field, just the experience of playing college baseball,” Rush said. “I actually came into the game in the third inning. We were losing. I think I went 3-for-3 with a couple of RBIs and we actually came back and won that game”

As far as academics in high school were concerned, Rush’s favorite subjects were Math and Chemistry. “I missed being an honor grad by a point and a half because they actually moved it while I was in school. To be an honor grad, the standard was a 3.3 GPA, but they moved the standard to a 3.5 while I was in school. Everybody coming in as freshman was shooting for at least that 3.3 GPA. I got my 3.3 and I thought I had some breathing room, but then during my senior year, they raised it by two points. That made it difficult for me.”

According to Miller Rush, Toby’s younger brother, Travis Rush, signed an undrafted free agent contract with the Pittsburgh Pirates down in Bradenton, FL. “He stayed there for four seasons,” Miller Rush said. According to Toby Rush, Travis made it as high as Triple A. “He was known for being a catcher,” Toby Rush said. “He had one of the strongest arms in South Georgia at the time. He was quick as lightning. He would bait you into running just so he could throw you out.”

In addition to playing shortstop, Toby Rush played second base and pitched a little bit. In football, he was a wide receiver, but also played running back and even quarterback at times. On defense, he played cornerback and safety. “I was a return specialist. I was a punter. It was a lot,” Rush said.

In basketball, Rush was a point guard for the Panthers and could have played basketball in college. “I was offered a basketball scholarship, but it conflicted with my baseball coaching at the recreation department,” Rush said. ”I was there first with my father, and he wasn’t in favor of me leaving to go play basketball.”

While in the military, Rush did four years. “It was an awesome experience. I actually did a tour in Bosnia,” Rush said. “I was there for 11 months. It was awesome. I stayed in shape. I was a Specialist, an E4, one step below Sergeant.”

Toby Rush not only excelled in athletics at Americus High, he also excelled in the more important thing: academics. He is an example for today’s student-athletes in Americus and Sumter County to follow.