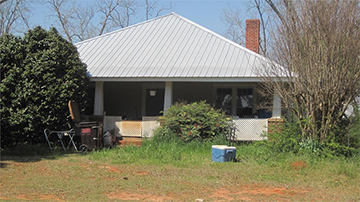 It was in this residence at 801 Pear Orchard Road, Parrott, that authorities busted a puppy mill and seized 60 dogs.

PARROTT — Authorities raided a puppy mill last week in rural Webster County, liberating 60 dogs found languishing in filth and disease. The owner has been arrested.
According to information from the Webster County Sheriff’s Office, on the morning of Oct. 30, sheriff’s authorities met with Terrell County Animal Control, the Georgia Department of Agriculture, and Oakland Veterinary Hospital, at a residence at 801 Pear Orchard Road, Parrott, just over the Webster County line. They had information about a possible puppy mill, and upon their arrival on scene, consent to search the property was provided by the owner, Glenda Albritton.

During the search of the property approximately 61 dogs were found in two different dwellings on the property. Of the dogs located, one was found dead. The dogs were found living in unsanitary conditions and with extremely matted hair. The canines were seized by the Webster County Sheriff’s Office and transported to Terrell County Animal Control in Dawson. The dogs have since been vaccinated and are being treated by Oakland Veterinary Hospital in Leesburg. On Tuesday morning, Webster County Chief Deputy Will Rodgers told the Times-Recorder that the Atlanta Humane Society had picked up about 40 of the dogs on Friday and will hopefully adopt them out to homes.
At around 1:49 p.m. Friday, the owner of the dogs, Glenda Albritton, age 71, surrendered herself to the Webster County Sheriff’s Office on charges of felony aggravated cruelty to animals and misdemeanor cruelty to animals. She was later released on a $65,000 bond.

High-ranking sheriff’s employee not off hook yet

By Beth Alston AMERICUS — Complaints against a member of the Sumter County Sheriff’s command staff could result in criminal... read more