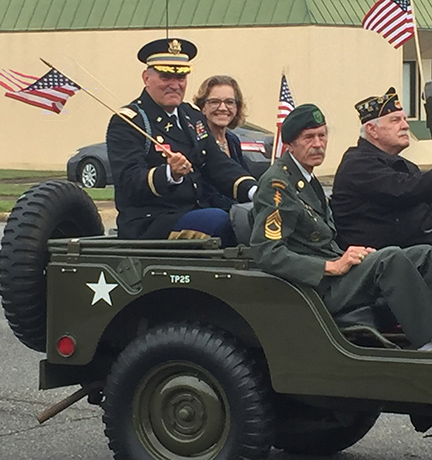 Col. Kenneth Kirk of the Georgia Department of Defense gave the keynote speech at the Veterans Day ceremony held Friday at the Sumter County Courthouse. He’s shown here riding in the parade with his wife Joyce Kirk.

AMERICUS — Veterans Day: It’s a day set aside during the year in which Americans pay tribute and honor to the military. No matter what stage in life a veteran is in, he or she is granted a special honor and tribute on this day for his or her service to our country.

Members of the C.B. Dowdell American Legion Post 558 Auxiliary marching in the parade.

On Friday, there was a Veterans Day ceremony at the Sumter County Courthouse, which took place at 10 a.m. It was followed by the fifth-annual Veterans Day Parade through the streets of downtown Americus. Even though Veterans Day is technically on Sunday, Nov. 11, the ceremony and the parade were both held on Friday. 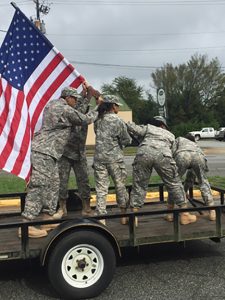 Americus-Sumter JROTC students dressed up and posing as the Marines raising a U.S. flag on Iwo Jima.

To start the ceremony, Chaplain Johnnie Pool of American Legion Post 558, which hosts the event, welcomed the group assembled outside the courthouse, and then led the opening prayer, followed by the Pledge of Allegiance. That was followed by the Gold Star presentation by Sumter County Coroner, Greg Hancock. Hancock expressed his gratitude and thankfulness to all of the veterans assembled at the ceremony for their service to our country. “When someone dies,” their families are left behind, and that’s what Gold Star families are,” Hancock said. “When they contacted me at my funeral home, I was glad to jump in and get a marker up and present it for the county.” The Gold Star was placed by the other monuments outside of the courthouse. 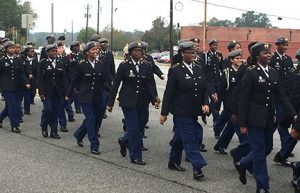 After that, Joyce Kirk introduced the keynote speaker, her husband, Col. Kenneth Kirk.
Col. Kirk greeted the crowd and thanked American Legion Post 558, along with all veterans and their supporters, for having him there. Kirk began his speech by reciting part of a poem written by a soldier who fought in World War I.

“In Flanders fields, the poppies grow
between the crosses row on row.
We are the dead.”
Kirk stopped there.
“That World War I poem goes on. It was by a Canadian lieutenant colonel who died in the war later on,” Kirk said. “This is the 100th anniversary of the ending of the ‘Great War’ (World War I) 1914-1918. It’s where we sent our doughboys (American troops),” Kirk continued. He then showed the assembled group an original helmet worn by a U.S. soldier from that era. “On this 100th anniversary of the ‘war to end all wars,” the war to make the world safe for democracy, a war in which 20 million people died, we honor all veterans now,” Kirk said. “We entered the war late in 1916, but at the 11th hour of the 11th day of the 11th month, 1918, that terrible first world war ended with an armistice. For years, we and other countries celebrated Armistice Day. After World War II and the Korean War added many more veterans, it was decided in 1954 to change the name to Veterans Day, and it has been called that ever since.”
Kirk said America has had other wars after the “war to end all wars.” He named World War II, Korea, Vietnam, Granada, Panama, Desert Storm and the Global War on Terror since 9/11. “There is no end to war,” Kirk said. “Millions have served, are serving and millions have sacrificed.” He said that on Friday, the Georgia National Guard was deploying to Afghanistan. “As a member of the Georgia State Defense Force and the Georgia Department of Defense, I just came out of the field yesterday at Fort Stewart training them to deal with what they’re going to find in Afghanistan, where the poppies grow,” Kirk said. “We still fight, we still die in fields of poppies.”.
He went on to recite the last line of the poem written in World War I:
“If you break faith with us who die, we shall not sleep, though poppies grow in Flanders fields.”
Kirk finished by saying “God bless our veterans, and God bless this great country, America.”
Kirk told the Americus Times-Recorder that his best time in the military was working with young troops like he did this past week at Fort Stewart. “Right now, all the troops that we’ve trained to deploy, they’ve all come back home safe,” he said. “That’s the goal, so we have a 100 percent record right now, and we want to keep it.” Kirk, a native of Cordele, said Veterans Day to him means honoring all of the veterans that are still alive that serve. “A lot of people confuse Veterans Day with Memorial Day, and they treat them the same,” he said. “There’s a very big difference. That big difference is that Memorial Day is to honor our honored dead who served. We do that, and that’s super important, but Veterans Day is to honor the living who have served.” Kirk said that American Legion Post 558 has done an outstanding job every year honoring those living veterans so they can actually see and feel the gratitude of the community.
Master Sgt. Leo Root was also on hand at the ceremony. Root served in the military from 1964-1984, and did three tours in Vietnam. For Root, there was no specific highlight of his career that stood out above the rest, but just the honor and the privilege to serve.
For SFC Tony Cooper, a 20-year veteran of the Army, celebrating Veterans Day is very special for him. “For me, it means honoring all veterans who have passed on,” Cooper said. “My brother, Arthur Cooper, passed on. I’m out here celebrating in his honor. That’s what it means to me. I do this every year.”
After the ceremony at the courthouse, the Veterans Day Parade began at the courthouse and proceeded down Lamar Street. It then made a left turn onto Prince Street to the red light at Forsyth. The parade then proceeded up Forsyth Street to the red light at Dudley Street. The parade made a left turn onto Dudley and stopped at the courthouse where it began.
The Grand Marshals in the parade were the Rev. Budd Womack, pastor of Lifepoint Church in Americus, and the Rev. Ken Anthony Brooks, pastor of Bethesda Missionary Baptist Church in Americus. Also participating in the parade were members of the American Legion Post 558, Col. Kenneth Kirk, students from Sumter County Middle School, the Americus-Sumter Marching Band and the Royal Diamonds, the Southland Academy and Schley County marching bands, Wiley’s Limousine Service and others. It was a great day to pay tribute to our veterans who have sacrificed so much for our country and the freedoms that we enjoy. 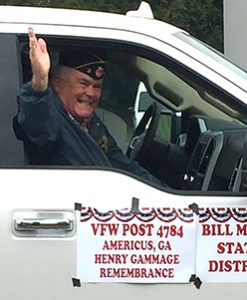 High-ranking sheriff’s employee not off hook yet

By Beth Alston AMERICUS — Complaints against a member of the Sumter County Sheriff’s command staff could result in criminal... read more