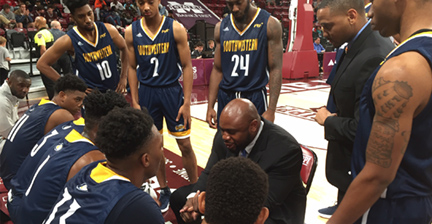 On Friday evening, November 9, the Hurricanes lost to Barton 80-72 before wrapping up their stay in Wilson with a 59-57 loss to Mount Olive University Saturday morning.

Against Barton, the Hurricanes trailed by 12 points at one point in the first half. However, GSW cut the deficit down to two points over the final five minutes of the half to trail 36-34 at halftime.

In the second half, however, Barton shot the ball extremely well from beyond the arc. The Bulldogs nailed 6 of 11 attempts from the three-point line (54.5 percent) to pull away from GSW. The Hurricanes turned the ball over five more times than Barton did during the second half.

Three-point shooting proved to be the difference. The Bulldogs went 9 of-22 from beyond the arc, while Georgia Southwestern State hit 4 of 17 attempts. The Bulldogs tallied more assists than did the Hurricanes as well (17-8).

In Game 2 on Saturday morning against Mount Olive University, it was a back-and-forth affair. There were 10 lead changes, and neither side led by more than eight points. The score was tied at halftime 29-29. GSW outrebounded Mount Olive by nine rebounds in the first half, but committed 14 first-half turnovers.

Late in the game, the Hurricanes trailed by eight, but knocked down three shots from beyond the arc in the final 28 seconds to trim the deficit to two. However, they ran out of time, and Mount Olive won 59-57.

In the game against Barton, four GSW players scored in double-figures. R.J. Sessions scored 17 points and connected on 8 of 13 shots. Quenten Taylor scored 16 points. Kwei Lartey scored 13 and Jalen Morgan finished with 10. Andre Statam was one-basket shy of a double-double. Statam scored eight points and had a game-high 10 rebounds.

In Saturday’s game against Mount Olive, Morgan turned in the Hurricanes’ first double-double of the season. He scored 15 points and pulled down a game-high 12 rebounds.

The Hurricanes (0-2) will try for their first win of the season when they host Fort Valley State on Wednesday, November 14, at 7:30 p.m.

AMERICUS- It had been 12 years since Southland Academy hosted a playoff football game. The Raiders (9-2) came into Harvey... read more