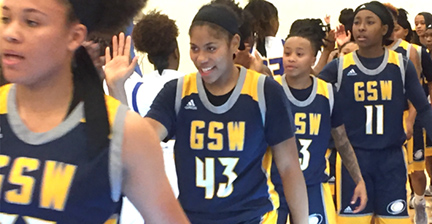 ALBANY, GA – The Georgia Southwestern State University women’s basketball team scored over 20 points in three of four quarters in an 84-64 win over Fort Valley State (FVS) on Saturday, November 17, at the PBC/SIAC Challenge at Albany State. A strong defense by the Lady Hurricanes held the Lady Wildcats to only 10 points in the third quarter.

GSW (3-1) started early and finished strong as Morgan Towells led the way with another solid performance. Towells posted a team-high 14 points, along with four rebounds and two steals.

Before they took care of FVS, the Lady Hurricanes had to deal with the host school, the Albany State Lady Golden Rams on Friday, November 16. GSW’s Lex Chapman scored 26 points off the bench to lead GSW to a 91-62 win over ASU on the opening day of the PBC/SIAC Challenge.

It was a close game early, but with three minutes to go in the first quarter, Kayla Smith tied the game at 12-12. From that point on, the Lady Hurricanes never looked back. They went on a 16-4 run to end the first quarter up 28-16. GSW kept their momentum going into the second half as they went into halftime up 46-29.

GSW scored 27 points in the third quarter and 18 in the fourth quarter to push the final score to 91-62. With three minutes left in the game. The Lady Hurricanes led by 30 points (87-57), but the Lady Golden Rams managed to end the game losing by 29.

In addition to Chapman, two other Lady Hurricanes scored in double-figures. Kayla Smith scored 12 points and had one block on the night. Jamesha Samuel finished with 11 bench points, and Morgan Towells led the team with eight rebounds and seven assists to go along with her eight points. A year ago, the Lady Hurricanes scored a record-high 101 points against ASU.

The Lady Hurricanes will now celebrate Thanksgiving, but will return to action on Wednesday, November 28, when they travel to Tuskegee, AL to take on Tuskegee University. Tip-off is scheduled for 6:30 p.m. EST.