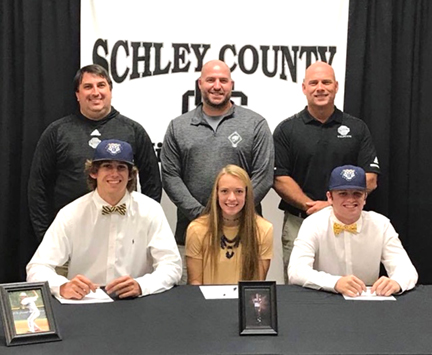 ELLAVILLE – Two Schley County baseball players, Ashton Goodin and Lorne Barineau, signed college scholarships to play at Andrew Junior College. In addition to Goodin and Barineau, one Lady Wildcat softball player signed a scholarship to play at Andrew as well. Emily Campbell was predominately a catcher for the Lady Wildcats. Just as Goodin and Barineau played key roles in the Wildcats’ success last spring, Campbell did the same for the Lady Wildcats. All three players signed their letters of intent on Monday, November 12, at Schley County High School. 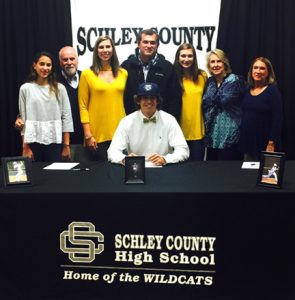 Goodin and Barineau helped lead Schley County to a 24-4 overall record and a Region 4-1A Championship. They went 14-1 in the region. The Wildcats advanced to the third round of the GHSA Class A-Public State Playoffs before being swept by Bowdon 6-5 and 5-3.

Ashton Goodin was mostly a pitcher for the Wildcats. He wants to get an Associates’ Degree in Business/Marketing at Andrew. Once he completes that in two years, Goodin plans to transfer to Mercer University, where he will work towards a Bachelor’s Degree in Mechanical Engineering. Goodin also hopes to continue his college baseball career at Mercer, playing for the Bears. 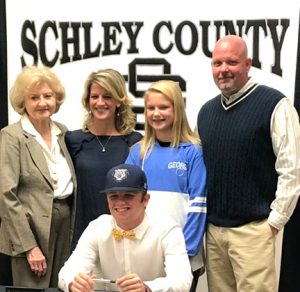 Lorne Barineau was also a pitcher for the Wildcats. He too plans to earn an Associates’ Degree in Business/Marketing at Andrew. Barineau would love the opportunity to continue to play and improve his skills in baseball at the next level. He hopes to further his education in Business Administration and Finance. He would like to pursue a career in the banking industry. 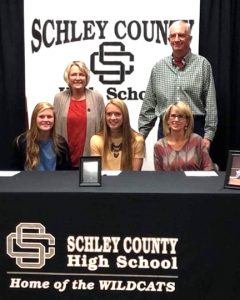 Emily Campbell helped lead the Schley County Lady Wildcats to a 22-7 overall record and a 12-2 region record in 2018. The Lady Wildcats advanced through the GHSA Class A-Public State Playoffs before losing to Lanier County 11-10. Campbell plans to earn an Associates’ Degree in Nursing from Andrew College. She would then like to earn her Bachelor’s Degree in Nursing at a university, where she could continue to play softball.