Citizen wants more transparency from Board of Commissioners 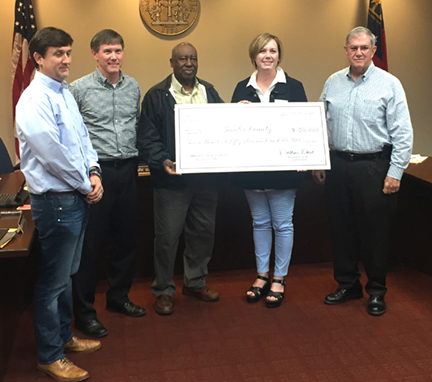 AMERICUS — The Sumter County Board of Commissioners (BOC) held its monthly meeting on Tuesday at the Sumter County Courthouse.
At each work session and monthly meeting, the BOC has a designated time in which Sumter County citizens attending the meetings can step to the podium and voice their concerns about any issues they think the BOC needs to address.
At Tuesday meeting, Paul H. Johnson Jr. of Americus expressed that he would like for the board to have a “public meeting,” and for the board to be more transparent in what they discuss at their meetings. “I’ve got a couple of things to say. I’ve been begging the commissioners for two to three years now to actually have a public meeting,” Johnson told the board. “What we are having now are not public meetings. The public has no idea about what you all are talking about when you have a meeting, so it’s not a public meeting.” Johnson, who was at the board work session on Nov. 13, went on to say that the board, in his opinion, was passing ordinances and regulations simply because they could without really thinking it through. “Let’s start having open meetings,” Johnson said. “Let’s start having either a TV camera, projector, or something to show the people that do come. There aren’t a lot that do. One of the main reasons most don’t come is because when they do come, you talk in terms that they don’t have any idea what you’re talking about, so please consider that.”
The board received an award from the Georgia Department of Community Affairs. Casey Beane, the Region 8 Representative for the GDCA, presented to the board the Community Block Development Grant Award for 2018. “I’m glad I was able to come,” Beane said. “I know that a month ago, we were all wondering what life was going to be like when the hurricane tried to blow us all away. For those that are here, the 2018 project that Sumter County will be doing is a neighborhood revitalization, which will include some housing. It’s for $750,000.” Beane said she was very appreciative that the county applied and that the GDCA will be very glad to see the project go through.
The board approved the application for the FY (Fiscal Year) 2018 Emergency Management Performance Grant with a total EMA budget of $41,636. Sumter County Emergency Management Director Nigel Poole said that this is a grant that is done every year. “You may remember a couple of years ago that it was a $9,600 amount and they changed it because we have a full-time EMA director and because of the population,” Poole said. Commissioner Mark Waddell made a motion to approve the FY 2018 Emergency Management Performance Grant (EMPG) and Commissioner George Torbert seconded the motion. It passed unanimously.
The board approved an agreement for the rental of the gymnastics facility at The Columns at Boone Park. Sumter County Parks and Recreation Department (SCPRD) Director Tim Estes said that he, along with County Attorney Kimberly Reid and Sumter County Gymnastics Coach Melissa Singley, went over the rental policies and made one adjustment on the times that the facility would be available for rental. “The original document had said until midnight, which is what we allow when somebody rents the program room or the fair grounds and we didn’t want to do that with a birthday party for young kids,” Estes said. “We moved that time from midnight to 9 p.m. That will be the latest they can do that.” Estes said he feels that the rental rates are affordable enough to the point that it will generate a good bit of revenue.
Commissioner Waddell made a motion for approval and Commissioner Torbert seconded it. It passed unanimously.
Estes also mentioned to the board that he received word on Monday that the SCPRD will receive a $1,500 scholarship from the Atlanta Hawks. “I had to fill out a two-page, online document with the Atlanta Hawks,” Estes said. “Their ownership group is trying to build interest in basketball outside of the Metro Atlanta I-285 area. They gave the Georgia Recreation & Parks Association (GRPA) a total pot of $100,000. What we did is we broke that up into the seven districts and said that for everybody in each district that will apply, we’ll take the 10 most worthy agencies in each district and give them $1,500.” Estes said the district that Sumter County is in, District 3, didn’t even have 10 agencies that applied. “Everybody that applied got that $1,500,” Estes said. “I went back to them (Atlanta Hawks) Monday and told them that we have this total pot of money that wasn’t used. I asked the Hawks if we could pool what’s left of that. The Hawks are in the process now of giving the entire pot of money. Basically, they took our registration numbers from last year. We’re projecting 10 percent growth, so they gave us that money based on that. We’re going to report our numbers after registration is over. If we exceed that growth, I feel like we will get that additional $1,000 to $1,200.”