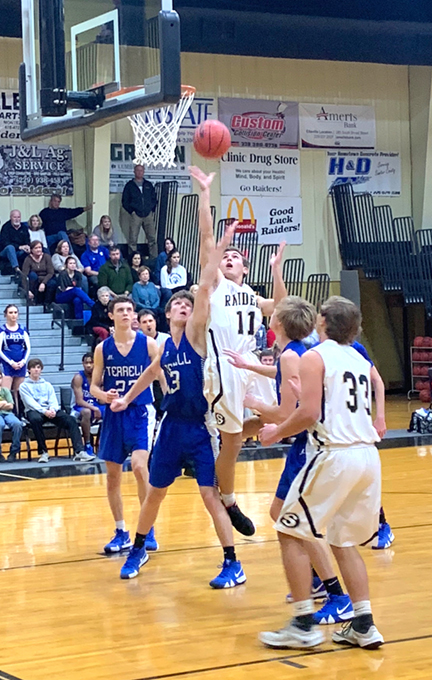 Southland’s Landon Law goes up for a layup. Photo by Ken Gustafson

AMERICUS – The Southland Academy football season ended two weeks ago, and many of the players on the Raider football team are also basketball players. They had to make a quick turn-around and prepare themselves for the season opener against Terrell Academy on Tuesday, November 27, at Southland Academy. Fortunately for the Raiders, they were able to pull off a 56-49 win, thanks in large part to a 14-7 run to begin the fourth quarter.

With 4:26 left in the game, the Raiders had a 41-38 lead. Terrell Academy had the ball. However, Luke Law got a steal and scored on a fast-break layup. The Raiders got another stop on defense and got the ball back. As Southland was running its offense, Owen Exley drove through the lane and scored on a layup to give the Raiders a 45-38 lead. A few minutes later, Southland was leading 46-40 before Luke Law drilled a three-pointer off the backboard to put the Raiders up by nine at 49-40. At that point, the Raiders took over the game, going up by as much as 11. The Eagles tried to get back in it, but it was too late as Southland went on to win by the score of 56-49.

“We shot the ball a little better in the fourth quarter from the three-point line,” Southland Head Coach Rundy Foster said. “We have to work on ‘end of the game’ stuff. With just two practices, we haven’t gone over that yet, but we will get better.” 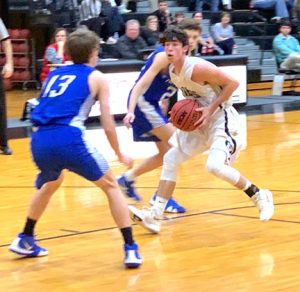 Nathan Duke looking to drive to the basket against Terrell Academy.
Photo by Ken Gustafson

The first quarter was back-and-forth between the two teams. Early on, Southland had a 6-4 lead until the Eagles scored four unanswered points. However, Landon Law was able to get a rebound and score to tie the ball game at 8-8 by the end of the first quarter.

The second quarter went much the same as the first with neither team able to build a big lead. Near the end of the half, Terrell Academy had a 17-13 lead before Max Foster, the son of the head coach, drilled a three-pointer to make the score 17-16 Eagles at halftime. 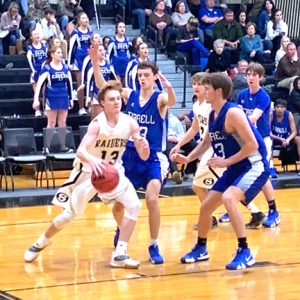 Southland guard Adam Smith drives to the basket against the Eagles.
Photo by Ken Gustafson

The third quarter was much the same as the previous two quarters as both teams kept the score close. Neither team was able to build a big lead, and Southland went into the fourth quarter leading by only two at 35-33.

The fourth quarter would be the difference maker. The break-away layup by Luke Law and the basket by Exley turned out to be the “beginning of the end” for the Eagles. Before those two baskets, Southland owned a 41-38 lead with a little over four minutes to go in the game. After the baskets by Law and Exley, the Raiders took over the game and prevented the Eagles from making a big run to get back in it. 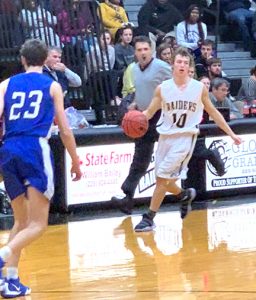 Southland guard Max Foster with the ball. Foster had eight points on the night against the Eagles.
Photo by Ken Gustafson

The Raiders had three players in double-figures. Luke Law led Southland with 12 points and both Nathan Duke and Chandler Studdard each scored 11. Duke was 7 of 9 from the foul line for the Raiders. Max Foster scored eight points and Bennett Carey had five. 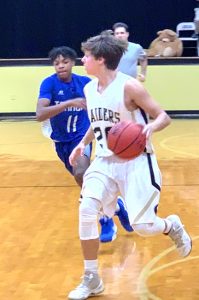 Southland’s Owen Exley tries to drive to the basket against Terrell Academy. Exley scored a key basket in the fourth-quarter run against the Eagles.
Photo by Ken Gustafson