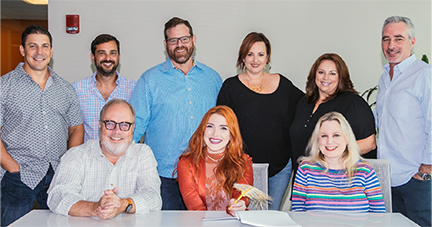 NASHVILLE, Tenn. — Universal Music Group Nashville has signed singer/songwriter Caylee Hammack.
A native of Ellaville, Georgia, Hammack moved to Nashville at age 19 and talked her way into gigs on Lower Broadway at night while trying to break into the songwriter community during the day. She signed a publishing deal in 2016, with Universal Music Publishing Group as the youngest writer on their roster and went on to win the ASCAP Foundation’s Sammy Cahn Award, which is given to a promising and aspiring lyricist. Past recipients of the prestigious award include John Mayer and Lori McKenna.
Hammack is represented by Red Light Management’s Mary Hilliard Harrington and Jay Williams/Joey Lee at William Morris Endeavor.
Hammack, 24, is a 2012 graduate of Southland Academy in Americus. It was always about music for Hammack, it seems. While the study of music was important to her, she possesses a natural talent for music.
“I always felt a fascinating pull towards music,” she told the Americus Times-Recorder is a previous interview. “My mother put me into piano lessons when I was 6, and I spent years trying to learn to read music. I was simply awful. After a while of fighting it, I realized that I could play piano by ear, but not by sight. I would sit at the piano and try to pick pieces out of songs I knew. After a while, I found the freedom of creating my own melodies and lyrics to sing along to. It seems, every time I would focus on something other than music in my childhood, God would bring me right back to the songs. I have wanted this dream since I can remember; it just took a few years to realize that I wanted to do it for the rest of my life.”
Hammack is multi-talented: accomplished in vocals, piano and guitar, and writes her own melodies and lyrics.
Starting out in the big city of Nashville at age 19 was not easy, she said.
“I stayed in a rundown motel with a chair against the door for a bit, until I could get on my feet. I played in bars downtown in Nashville just for tips,” she said. “I was very lonely in the big city without my family. It was a rough road at first, but every morning, I would wake up and tell myself that I couldn’t leave until I had made my mark on this town. It became a mantra of sorts. I forced myself to not give up, even when it was difficult. I called my parents every day before my gigs downtown and every night, I prayed that God would guide me to the path my feet were to follow. I now look back at how scared I was, and I can laugh about it. Part of that struggle made me who I am … ”