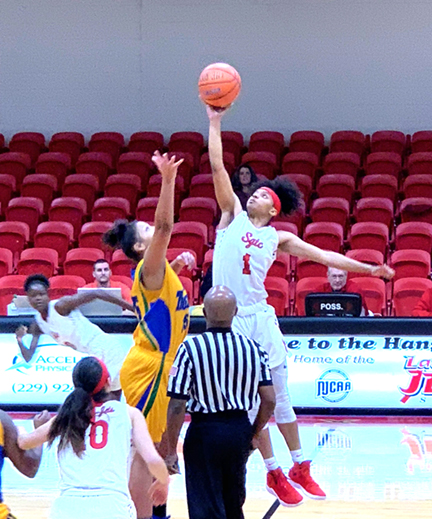 Though he was happy with the win, SGTC Head Coach James Frey was not pleased with his team’s performance. “It just wasn’t a very good job by us today,” Frey said. “We were lethargic and a little lackadaisical.” Frey went on to say that his team was playing without their starting center, Bigue Sarr. Sarr suffered a knee injury last weekend. “Hats off to Southern Crescent. They played really hard. They played with a lot of energy,” Frey said. “I thought we just went through the motions for the most part. It was a physical game. We fought through it and got a win. I’ll take the win, but we’ve got to get better. That’s for sure.” 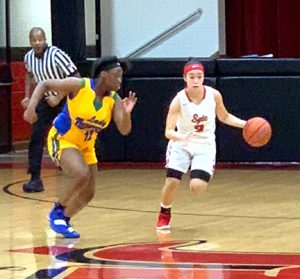 SGTC guard Rio Yamazaki with the ball. Yamazaki scored 10 points in the win over Southern Crescent.
Photo by Ken Gustafson

Alyssa Nieves led the Lady Jets in scoring with 15 points. Two other SGTC players were in double-figures. Ricka Jackson scored 14 points and Rio Yamazaki had 10. For the game, SGTC shot 35.1 percent from the field, making 26-74 shots. They shot 12-33 from beyond the arc (36.4 percent) and made 8-10 free throws for the game (80 percent). 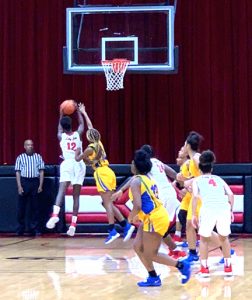 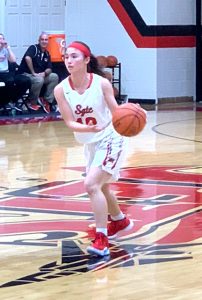 In the beginning of the second half, SCCC came out strong, scoring six unanswered points. However, the Lady Jets responded with five points, three of them coming on a three-pointer by Nieves to make the score 42-32 SGTC with just under six minutes to play in the third quarter. Nieves hit another three-pointer to put the Lady Jets up 45-34 with under three minutes to play in the quarter. 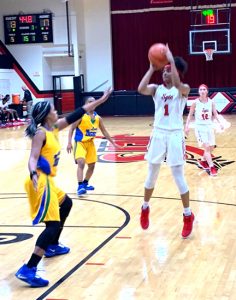 The final quarter began with the Lady Jets going on a 7-0 run, which included a three-pointer by Jackson. With 7:37 to play in the game, the Lady Tigers called a timeout, trailing 57-39. 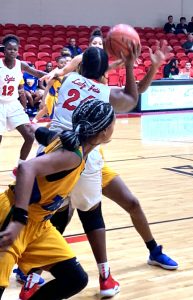 The Lady Tigers struggled to score and SGTC stepped it up on the defensive end. With around 5:30 to go in the game, Yamazaki created a steal, drove to the basket and scored. She then hit a three-pointer to put the Lady Jets up by 20 at 64-44. At this point, the Lady Jets had taken total control of the game.

With under three minutes left in the game, the Lady Jets put the icing on the cake when Yasriyyah Wazeerud-Din hit a three-pointer to put SGTC up by 23 points. Kamya Hollingshed hit a jumper to score the last basket for SGTC, and the Lady Jets went on to win 72-51. 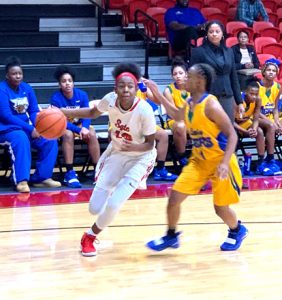 SGT’C’s Yasriyyah Wazeerud-Din driving to the basket against an SCCC defender.
Wazeerud-Din scored nine points for the Lady Jets.
Photo by Ken Gustafson

The Lady Jets, ranked 11th in the nation in the National Junior College Athletic Association (NJCAA) Division 1 Top 25 standings, are now 9-1 overall and 4-0 in the Georgia Collegiate Athletic Association (GCAA). They will continue conference play when they travel to Cuthbert, GA to take on Andrew College on Saturday, December 8. Tip-off is scheduled for 1 p.m.

ELLAVILLE – The Schley County boys’ basketball team (1-1) jumped out to a 7-0 lead early and never looked back... read more