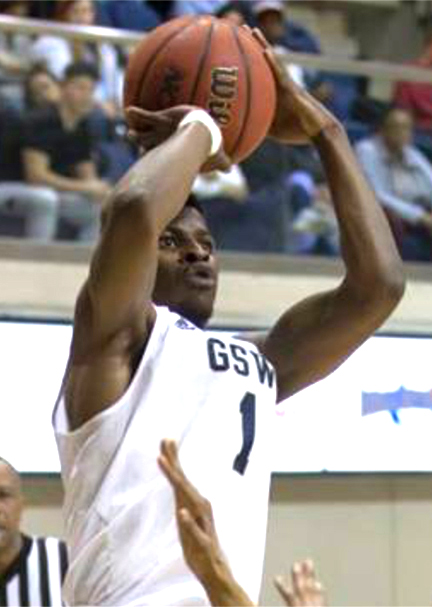 GSW senior guard R.J. Sessions led the Hurricanes with 21 points in the 77-69 loss to USC Aiken. Photo by GSW

AIKEN, SC – The Georgia Southwestern State University men’s basketball team lost once again to the Pacers of the University of South Carolina Aiken at the USC Aiken Convocation Center. The Hurricanes are now 0-12 all-time in that building after the Pacers defeated the Hurricanes 77-69 on Saturday, December 1.

The Pacers scored 10 unanswered points in the final minute of the game to take the lead and pull away from GSW.

So far, the Hurricanes are winless on the road this season. They fall to 1-4 overall and 0-1 in the Peach Belt Conference. USC Aiken has opened its season with seven consecutive victories. They are undefeated at 7-0 and 2-0 in the PBC.

The game started out well for GSW in the first half. The Hurricanes hit 5-of-9 three-point attempts and held the Pacers to 18.2 percent shooting. By halftime, the Hurricanes led 33-22.

The Hurricanes led for most of the game, but the final minute belonged to the Pacers. The Hurricanes turned the ball over more than once. The Pacers took advantage by hitting two shots and sinking all six of their free-throw attempts in the last minute of the game.

The Hurricanes finished higher in most categories, but turnovers did them in. GSW committed 26 turnovers, compared to only nine committed by USC Aiken. The Pacers led 35-11 in points off turnovers.

GSW had five players score in double-figures. R.J. Sessions led the team in scoring with 21 points. He hit 5-of-8 three-pointers and dished out five assists. Andre Statam scored 13 points. Jalen Morgan scored 12. Quenten Taylor had 11 and Devin Watson chipped in 10 off the bench. Jamari Dean pulled down a game-high 10 rebounds for the Hurricanes.

Up next for the Hurricanes is a rematch against Fort Valley State on Monday, December 3, in Fort Valley, GA. The Hurricanes defeated the Wildcats 68-59 on Wednesday, November 14, in Americus. Tip-off for that game is scheduled for 7:30 p.m.