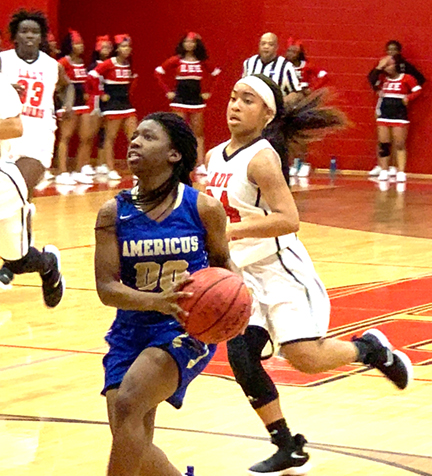 LEESBURG – The second act of the “Battle of Highway 19” took place Saturday night, December 1. This time, it was at Lee County High School in Leesburg. The ASHS Lady Wildcats knew they would be in for a fight with the Lady Trojans. ASHS defeated Lee County 58-52 on Saturday, November 24, in Americus. However, several missed free throws by the Lady Panthers resulted in a 41-36 loss to the Lady Trojans. The Lady Panthers fall to 2-1 on the season and 1-0 in Region 1-AAAA play.

With the win, Lee County improves to 2-4 overall.

The Lady Panthers went 12-34 from the foul line. That proved to be a huge factor in the Lady Panthers’ defeat. “We missed too many easy baskets. There were missed assignments. We just played horrible,” ASHS Head Coach Sherry Harris said. “I don’t know if it was because Georgia was playing tonight. I don’t know. We just didn’t play well.”

De’Asia Ford led the Lady Panthers in scoring with 12 points and Trinity Jackson had 10. Tiffani Goodman also chipped in six points in the loss. The Lady Trojans were led in scoring by Monique Judge with 13 points. Toni Edney scored 10 and Erica Irby chipped in nine points in the win for Lee County. 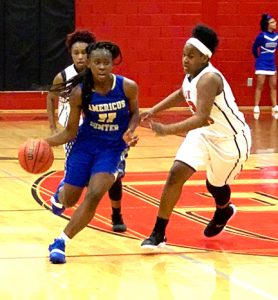 ASHS guard De’Asia Ford pushes the ball up the court against Lee County. Ford led the Lady Panthers with 12 points in the 41-36 loss.
Photo by Ken Gustafson

LC jumped out to a 3-0 lead right away on a three-pointer by Judge. Tiffany Goodman answered for the Lady Wildcats as she scored two points, but Judge nailed another three-pointer to give the Lady Trojans a 6-2 lead early in the first quarter. At that point, LC went on a 5-2 run before Ford drove to the basket and scored for ASHS. The Lady Panthers then went on an 8-4 run to cut LC’s lead to 15-14 with seconds left in the first quarter. However, Judge knocked down another shot from beyond the arc to give the Lady Trojans an 18-14 lead by the end of the first quarter.

The second quarter was an evenly-played quarter between both teams. However, the Lady Trojans went into halftime with a 25-23 lead.

The Lady Panthers opened up the second half by getting a free-throw from Ford. Trinity Jackson and Tiffany Goodman scored a two-point basket and a free throw respectively to give ASHS a 29-25 lead. However, the Lady Trojans scored four unanswered points to tie the score at 29-29 by the end of the third quarter.

LC’s Toni Edney opened the scoring for the Lady Trojans in the fourth quarter by making two free throws. Ford tried to tie the game by driving to the basket, but was called for an offensive foul. Both teams struggled to score in the third quarter, and both teams committed several turnovers. Latavia Jones made one of two free throws to make the score 32-29 in favor of the Lady Trojans. Brianna Pope had two opportunities to put points on the board for the Lady Panthers at the free-throw line, but on both occasions, she missed the front end of a one-and-one. LC continued to build its lead by making free throws down the stretch. ASHS continued to struggle scoring in the second half. Up until the 3:00 mark of the game, the Lady Panthers had only scored eight points in the second half. With 2:35 to go in the game, LC had a 40-31 lead.

Ford tried to make something happen for the Lady Panthers by driving to the basket. She was fouled while shooting, but only made one of two free throws, making the score 40-32 in favor of the Lady Trojans. With 1:17 left in the game, Ford drove to the basket and scored to cut the deficit to 40-34. With 52 seconds left, Destinee Sims had a chance at the free-throw line to cut the deficit for the Lady Panthers, but she missed both free throws. With 38.4 seconds left, Edney was fouled and hit on of two free throws to give the Lady Trojans a 41-34 lead. With under 20 seconds left, Ford was able to get a steal, a basket and a foul on the play. However, she missed the free throw. The Lady Trojans ran out the clock to preserve their 41-36 win.

The Lady Panthers will return to region play on Tuesday, December 4, when they travel to Columbus, GA to take on the Lady Blue Devils of Columbus (1-4, 0-1). Tip-off is scheduled for 6 p.m.