TIFTON, GA – The Sumter County 10 All-Stars are headed to the Georgia Recreation and Parks Association (GRPA) Class B State Finals in Calhoun, GA on Saturday, December 8. They will be taking on the Calhoun 10u All-Stars at the Calhoun High School football stadium. 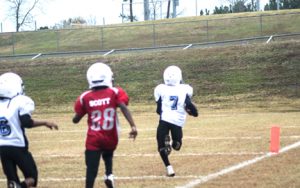 Sumter County’s Zayden Monts almost scores a touchdown against Lyons, but is called out of bounds before he reaches the end zone.
Submitted Photo

Sumter County qualified for the state championship by defeating Liberty County 38-22 in the South Regional Final on Tuesday, December 4, in Tifton. In that game, both AJ Kearse and Amari Hubbard scored touchdowns. Late in the game, SC running back James Harper ran for a first down to seal the game and a berth in the GRPA Class B State Finals. 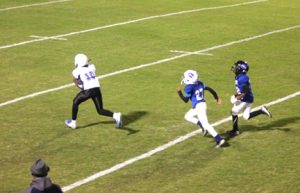 SC wide receiver A.J. Kearse catches a long bomb for a touchdown against Liberty County with one second left in the first half.
Submitted Photo

Before they faced Liberty County, Sumter County first had to get by Lyons on Saturday, December 1, in Tifton. The SC All-Stars defeated Lyons 30-6. Kearse, Hubbard, Omari Woodard and Travin Jordan all scored touchdowns in that game to lead SC to victory. 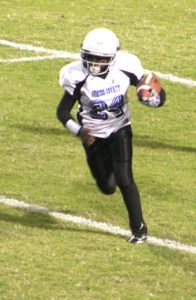 The Sumter County 10u All-Stars will travel to Calhoun, GA to take on the Calhoun 10u All-Stars for the GRPA Class B State Finals on Saturday, December 8, at the Calhoun High School football stadium. Kickoff is scheduled for 1:30 p.m.