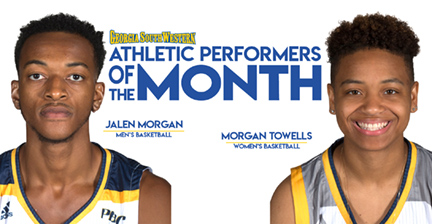 Morgan, a 6-foot-8 graduate student from Indianapolis, IN, led the Hurricanes by averaging 15.3 points per game and 8.0 rebounds per game over the four games played in November. He posted a pair of double-doubles and made 61.9 percent of his shots. Morgan’s best performance came on Wednesday, November 14, in a home game against Fort Valley State. Morgan made 9 of 12 shots in that game. He made all three of his free-throw attempts and finished with 21 points and 11 rebounds.

Morgan Towells is a 5-foot-8 junior from Atlanta. She led the Lady Hurricanes in scoring with 13.8 points per game and dished out 14 assists over a five-game period. Towells shot 45.5 percent from beyond the arc and added 4.4 rebounds per game. Her best performance came on the season opener on Friday, November 9, when she scored 22 points, grabbed eight rebounds and had seven steals against Limestone College.