AMERICUS — It was a cool, crisp, and sunny day on Friday outside of the building which houses the Georgia Southwestern State University School of Nursing. It was a time of remembrance and reflection. Most importantly, however, it was a time to celebrate the lives and legacies of police officers Nick Smarr and Jody Smith.
Well over 100 people — family, friends, police officers, and soldiers from the United States Marine Corps — gathered for a special commemorative ceremony to celebrate the lives of Nick Smarr and Jody Smith. Two years ago, on December 7, 2016, Americus Police Officer Nick Smarr and GSW Police Officer Jody Smith, best friends and roommates, were shot while responding to a domestic call. Smarr died at the scene while Smith succumbed to his injuries the following day.
GSW President Neal Weaver, Ph.D., made his opening remarks, welcoming all of those in attendance. “It is a real privilege for us as an institution to host this event which honors and remembers two very heroic young men,” Weaver said. “It is also a solemn reminder of the risks that the men and women who serve our community as first responders take every day.”
After the invocation by the Rev. David Kitchens, chaplain of the Americus Police Department, Americus Police Chief Mark Scott made his opening remarks by thanking everyone for being in attendance. “Our job is a tough job sometimes, but it’s made a lot easier knowing that we have a community here in Americus and Sumter County that loves us,” Scott said. “You support us. You stand behind us and you’re with us every day. We appreciate that. I would like to thank our special guests for being here today, especially any elected officials and folks from across the state that made time to come here today.”
He went on to say that President Jimmy and Rosalynn Carter wanted to be there, but were not able to make it. Scott said that President Carter emailed a draft of a letter to him so that it could be read to the families of Smarr and Smith at the ceremony. Scott also said Carter would send the families a copy of the letter with his signature on it.
With that, he read Jimmy Carter’s letter to the assembly.
“To the parents and loved ones of the late Nick Smarr and Jody Smith,”
“It is an act of courage to stand up for one’s self, but to stand up for one’s friend is the most courageous and selfless act of all. This is how Rosalynn and I remember Nick Smarr and Jody Smith. As we commemorate the second anniversary of their death as heroes, public servants and most importantly, friends. As a former President of the United States, I’ve had the privilege of honoring those who sacrificed everything for the sake of others for many years. I am moved by the acts of Officers Smith and Smarr, and though nothing can make up for the loss that has been suffered, I hope those affected by their deaths can find peace in knowing that their legacies as heroes and friends can never be taken from those who love them. The presentation of the Navy and Marine Corps Medal to Nick is not to be taken lightly, nor is the testimony of those whose lives were saved by Jody’s decision to be an organ donor. Let us thank God for the opportunity for life that was given to others in the wake of this tragedy, and remember that one day, you will see both your sons, brothers and friends in the Kingdom of Heaven. The true measure of a person’s life is the impact that they have had for good in the lives of others. Nick Smarr and Jody Smith will always be remembered for their selfless service to their country and to their community. May God bless you and your family and grant you peace. — Jimmy and Rosalynn Carter”
Scott then introduced Lt. Col. Charlie Daniel of the U.S. Marine Corps to the podium for the purpose of presenting the Marine Corps Medal to the Smarr family. Before Daniel presented the honor to Danny and Janice Smarr, parents of Nick Smarr, he made a few emarks about his time serving with Lance Cpl. Nicholas Smarr at Robins Air Force Base in Warner Robins.
“Lance Corporal Smarr worked in our S1 Division, which is like our administration,” Daniel said. “If you can imagine, no one gets excited when your pay check gets there on time, or stuff happens the way it’s supposed to. You normally only get complaints when it doesn’t. It’s like working in the complaint department.” Daniel said that every time he had the occasion of going into S1, all he could see was Smarr’s smiling face. “I don’t know what it was, but it was infectious. You had to smile back at him,” Daniel said. “If you went in there angry, you instantly were not angry once you started dealing with him.” 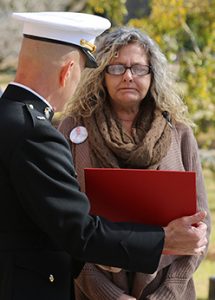 Daniel recalled that one day he asked Smarr’s supervisor if Smarr was always happy. Smarr’s supervisor told Daniel that Smarr was always happy and always eager to serve whoever came into the door.
Daniel referred to Smarr as the epitome of a model marine with his attitude.
Before he made the presentation of the Navy and Marine Corps Medal to Janice Smarr, Daniel said that the medal is the highest award bestowed on somebody for heroism not involved in combat. He also said that to receive the award, one also has to put his or her own life at risk or jeopardize his or her own wellbeing. “I’ve never seen this award presented before,” Daniel said. Once Daniel was finished making his remarks, he presented the Navy and Marine Corps Medal (posthumously) to Smarr’s mother.
Tracy Ide, Senior Public Affairs coordinator for LifeLink of Georgia, came to the podium to make her remarks about Georgia Southwestern State University Police Officer Jody Smith. “It is my privilege today to honor Jody and his family,” Ide said. “It is our honor every day to work with families to help them honor their loved one’s decision to be an organ donor.” She said that Smith was a public servant who put his life on the line every day in the community of Americus. “It was while he was doing that, he made a decision before his death to become an organ donor. His family helped us honor that decision,” Ide said. “He wanted to help people when he was gone. He never knew when that day might be, but he knew that was something he wanted to do, so we are honored to honor his decision.” Ide sharec information about the recipients who were helped by Smith’s decision to be an organ donor. “One of Jody’s kidneys was able to help a 41-year-old man from Georgia. He’s married, has four children and is a web designer,” Ide said. “Jody’s liver saved a 46-year-old married man from Georgia. His heart was successfully recovered for the use of his heart valves. Today, heart valves can be transplanted to correct heart defects, which could be for young or old,” Ide continued. She mentionrf that Smith’s lungs were able to save a 57-year-old man in Indiana. This man is married, has two children, and has worked as a welder in a machine shop. He enjoys being active and making things. “These people would not be alive today if it wasn’t for Jody’s decision to be an organ donor,” Ide said. “One organ, eye and tissue donor has the potential to help up to 75 people. What a legacy to leave behind to know that 75 people can live because of the decision of one person.”
Ide introduced a recipient of one of Smith’s organs, Brandon Simpson. Simpson also shared his remarks. “I am still shocked and amazed at how it all worked out,” Simpson said. He currently lives in Atlanta, but is from Americus. Simpson said that he saw on the news what happened to Smith and Smarr, but that he had no idea that the tragedy that took place would lead to him receiving a kidney from Smith. Simpson said he got a call one day asking him if he had received a blood transfusion in the last six months. He said that he hadn’t. “The next day, I got a call saying that they had a potential match,” Simpson said. “I still had no idea that it was one of Jody’s. I was just grateful and thankful that I actually found a match.” Simpson went on to say that he had been on dialysis for eight years and that he worked as much as he could. “I went all the way through the process of getting the kidney transplant, and my aunt told me that she believed that I had Jody’s kidney,” Simpson said. “I said, ‘No, that’s too close.’ As time went on, I started thinking of the possibility that I could have Jody’s kidney. What if this really is true?” Simpson said he got a letter from the donor’s family. “I opened it immediately, and when I read the first line: ‘Hello, my name is Miss Sharron (last name was blanked out). I am the donor’s mother of Jody.’ I was like, Wow!” Simpson said that while he didn’t know the family, he found it amazing that God chose him to receive one of Smith’s organs. “He’s from Americus. I’m from Americus, and to top it off, it was on my grandmother’s birthday,” Simpson said. “Who could have ever put anything like that together? I just want to thank his family for raising him to have a big heart. I’m very grateful that Miss Sharron (Sharon Johnson, Jody’s mother) has opened up her arms and her home to me and loved on me through all of this.” Simpson said that what Jody Smith did saved his life and has allowed him to go on and be the person that God has called him to be.
Once Simpson finished his remarks, Ide, on behalf of LifeLink of Georgia, presented the Donate Life Pin to Sharron Johnson and her husband Paul Johnson, Jody Smith’s step father. She also gave each of the family members a Christmas ornament. “It is our symbol of a tree, and that is what we use for our donor families,” Ide said. 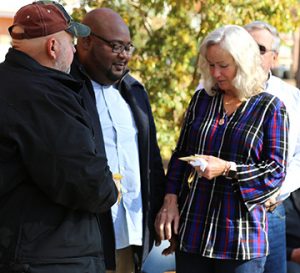 Sharron Johnson, mother of Jody Smith, is shown talking with Brandon Simpson, middle, who received one of Smith’s kidneys after Smith’s death.