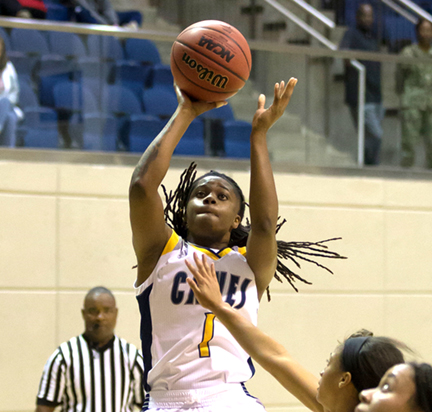 GSW freshman guard Lex Chatman taking a shot in a previous game. Chatman scored 11 points to lead the Lady Hurricanes in their 78-54 loss to Valdosta State. Photo by GSW

VALDOSTA, GA – An 18-2 run by Valdosta State in the second quarter caused the Lady Hurricanes’ goal for a road victory to go up in flames as the Lady Blazers defeated Georgia Southwestern State University 78-54 on Wednesday, December 12, at Valdosta State.

GSW (3-4) started the second quarter with a layup by Tamia Smith. That was followed by a three-pointer by Madison Johnson before VSU started heating up. A layup by VSU’s Crystal Townsend sparked an 18-2 run that the Lady Hurricanes couldn’t handle. The Lady Blazers held GSW to seven points in the second quarter. By halftime, VSU had a 30-25 lead.

Early in the second half, Mariya Trimble tried to get the Lady Hurricanes going when she scored on a layup to cut VSU’s lead to 30-27. However, GSW went scoreless afterwards.

Valdosta State (6-3) led by as much as 26 points in the final quarter as they combined for 48 second-half points compared to GSW’s 29.

Chatman led GSW in scoring with 11 points. Nine of those points came on the strength of three-pointers. Chatman also had four steals and three assists. Sapp, who came off the bench, grabbed a team-high four rebounds to go with her eight points. Kya Cochran chipped in seven points in the losing cause.

VSU’s Nari Garner came off the bench to hit five three-pointers as she finished with a team-high 18 points.

The Lady Hurricanes will try to get back in the win column when they play the first of their two home conference games before they leave for the Christmas break. They will host Francis Marion University on Monday, December 17. Tip-off is scheduled at 1 p.m.