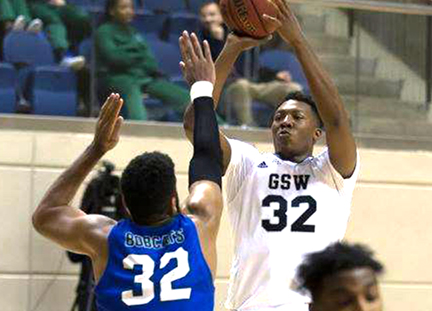 AMERICUS, GA – Playing their first home game in a month, the Georgia Southwestern State University men’s basketball team (2-5, 0-1) held off a second-half rally from Albany State to earn a 71-66 victory at the Storm Dome on Thursday, December 13.

R.J. Sessions and Kwei Lartey were both in double-figures. They each scored 17 points to lead the Hurricanes to victory. The win ended GSW’s three-game losing streak, while Albany State has now lost four in a row to fall to 3-8 this season.

GSW jumped out to a 9-0 lead and held Albany State scoreless over the opening three and a half minutes.

The Hurricanes took a 16-4 lead when Kobie Williams scored on a layup with 13:59 remaining in the first half. The Hurricanes’ largest lead of the night came after a sessions dunk put GSW up 31-17 with 4:38 left before halftime.

However, the Golden Rams didn’t quit. They went on a 16-5 run to start the second half. GSW was able to stop the run and work the margin back to eight points at 60-52 with 5:36 left in the game.

ASU made another run and got themselves to within one point with 1:30 left in the game. However, Andre Statam nailed a much-needed three-pointer. Lartey and Jamari Dean also hit four free throws to keep the Golden Rams at bay.

Lartey was 5 for 10 from the field and Statam led GSW in rebounds with seven.

ASU was led in scoring by Michael Green with 16 points.

Up next for the Hurricanes is another Peach Belt Conference game against Francis Marion University at home in the Storm Dome on Monday, December 17. Tip-off is scheduled for 11 a.m.

From Staff Reports   VALDOSTA, GA – An 18-2 run by Valdosta State in the second quarter caused the Lady... read more