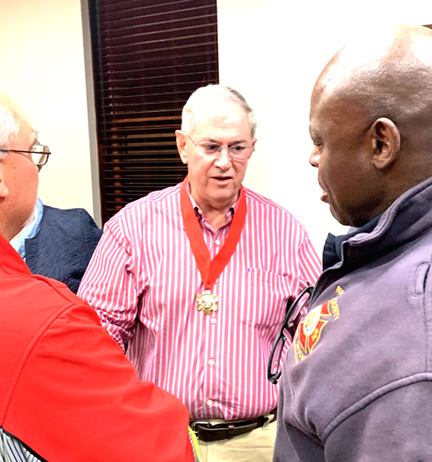 Sumter County Board of Commissioners Chairman Randy Howard receives the Civilian Award of the Fire Service Medal of Honor from Sumter County Fire & Rescue for his help in starting the fire department in 2009, and for his continued support over the years.

AMERICUS — Sumter County Board of Commissioners Chairman Randy Howard was awarded the Civilian Award of the Fire Service Medal of Honor at the Board of Commissioners’ (BOC) monthly work session at the Sumter County Courthouse on Tuesday.
The medal was presented to Howard by Sumter County Fire Chief John Ekaitis. Several Sumter County firefighters were present to witness the award presentation.
“Our Sumter County Fire and Rescue personnel are here this evening to honor and to present to Chairman Randy Howard a special award on behalf of Sumter County Fire and Rescue,” Ekaitis said. “When I came here seven years ago, I was amazed that there was no fire department in place until 2009.” He said that Howard had the vision to see a county-wide fire department being formed, and that with the assistance of the other commissioners during that time, that vision became reality.
Ekaitis said that the forming of the fire department created 17 jobs and several part-time positions. He said that Howard will be sorely missed by the fire department, but never forgotten. With that, Ekaitis presented Howard with the Civilian Award of the fire service Medal of Honor. “I really don’t know what to say. From the bottom of my heart, I’m very, very thankful,” Howard said. “Nobody is prouder than I am to see our fire department today.”
In other business, Kelli Sterling, Chehaw District Executive for the South Georgia Council of the Boy Scouts of America, addressed the board about the Exploring Program to get youth and high school students interested in the fire and rescue service. “We work with the local schools and do a Career Interests Survey,” Sterling said. “What we are trying to do is get a feel for what types of careers kids might be interested in.” Sterling said that she is working with Ekaitis in getting an Exploring Program post set up in Sumter County. “We reach out to both young men and women and they come and do some of the things that they would do in the fire service,” Sterling said. “They are getting hands-on experience in this particular career field. A lot of organizations and schools are pushing college, but some of these types of services are falling by the wayside.”
Sterling said that the program is run by the youth because at the Boy Scouts, they are trying to build leaders and train young people to step up and show initiative. “The youth will run the posts with the supervision of the advisors,” She said.
Commissioner Clay Jones asked Sterling what the cost is for the kids to be in the program. Sterling replied that there is an annual registration fee of $33 on top of any extra fees that the individual post may assess to them. She also said there is an annual $40 liability insurance fee that would be paid by the fire department. Ekaitis suggested that the board have Sterling come back in January to answer any more questions about the program and that hopefully, the board will approve the Exploring Program being in Sumter County.
Sumter County Parks and Recreation Department (SCPRD) Director Tim Estes asked for the board approval to use SSCI, a company that specializes in youth sports background checks, as a tool to perform electronic background checks on prospective youth coaches. “For many years, we conducted background checks on volunteer coaches. We’ve basically done that through the local sheriff’s department,” Estes said. He explained the slow and tedious process of doing this by paper, and that doing it electronically through SSCI would be much more beneficial. “SSCI is the industry leader in this. They do everything online,” Estes told the board. “The sheriff’s department currently bills us $18.50 per background check to our budget. SSCI is $18, so there would be a little bit of cost-savings there,” Estes said. He also said that he likes that fact that with SSCI, he and his staff don’t have to keep up with paperwork and that everything is stored electronically. Estes also mentioned that he likes the fact that with SSCI, it’s a lot more private.
Commissioner Mark Waddell made a motion to approve the SCPRD to use SSCI as a tool to conduct background checks on their volunteer coaches electronically. Commissioner Thomas Jordan seconded the motion. It passed unanimously.
Estes also told the board that the Atlanta Hawks Foundation had granted the SCPRD $1,200 in addition to the original $1,400 scholarship money the SCPRD had already applied for. “When all was said and done, there was only $55,000 of the Hawks’ designated $100,000 that was applied for by agencies around the state,” Estes said. “We went back to the Hawks and asked them what we can do with this remaining $45,000 to make sure these agencies get it.” Estes said that the Hawks decided that those agencies around the state who originally applied for the $1,400 would receive an additional $1,200. “We’re getting an additional $1,200 for a total of $2,600, which doesn’t sound like a whole lot, but it does cover much of the cost of equipment that we purchase for our new basketball program,” Estes said.

By Ken Gustafson AMERICUS — It was a cool, crisp, and sunny day on Friday outside of the building which... read more