Lady Raiders withstand fourth-quarter run to hold on and win 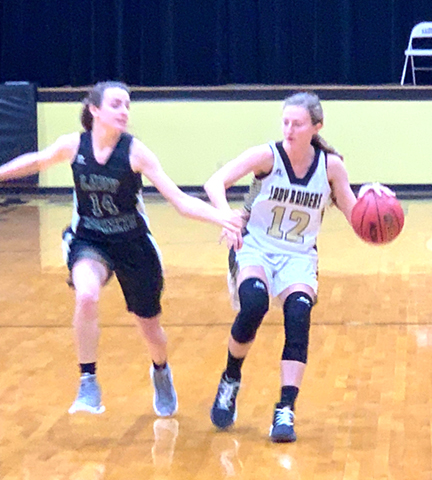 Southland Academy senior point guard Sydney Payne with the ball against Westfield. Payne scored eight points and was able to dribble through the Lady Hornets’ press to run the clock out for the win. Photo by Ken Gustafson

The Lady Hornets outscored SA 22-6 in the final quarter due to their full-court pressure, which forced the Lady Raiders into committing several turnovers. With two seconds left in the contest, the Lady Hornets tried to get a steal and a winning basket using their full-court press. But SA senior guard Sydney Payne was able to dribble through the press and run out the clock to preserve the one-point win for the Lady Raiders.

“Early on, we played really good defense. We had them scouted well,” SA head coach Ty Kinslow said. “They couldn’t get into what they wanted to do and we played about as good a first half as we can. We told the girls how important the third quarter was and we came out and played ok.”

Payne, Calyn Fort and Holly McCain each scored eight points to lead the Lady Raiders. Macy Williams scored seven points. Maddie Crisp had three, and both Haleigh Warren and Reese Roland scored two points to round out the scoring for SA. Allison Brown led the Lady Hornets with 11 points.

Early on, it was a contrast of playing styles. Westfield wanted to take their time and move the ball around the perimeter to find the high-percentage shot. They also wanted to slow down the faster pace of the Lady Raiders. SA wanted to speed things up just a little bit. During the first three to four minutes or so, it was a low-scoring affair with neither team scoring a lot of points. 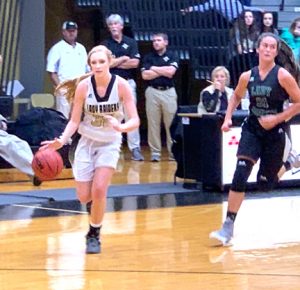 The Lady Raiders continued to work on their half-court offense in the second half. With under two minutes to go in the third quarter, SA had a 26-14 lead before Fort nailed a three-pointer to extend SA’s lead to 15 points.

The Lady Hornets showed some life in the fourth quarter. Down 31-16, they scored six unanswered points, including a three-pointer by Ellie Williams. The Lady Hornets’ full-court press started forcing SA into committing turnovers.

“In the fourth quarter, we lost our composure a little bit. We still have to learn how to finish games better,” Kinslow said. “I’m proud that we hung on once it got to be a battle right down to the wire. We did finish and win, but we’ve got to finish games and make smarter decisions down the stretch.”

The Lady Raiders didn’t score in the final quarter until Macy Williams drew a shooting foul and made one of two free throws to give SA a 32-22 lead. The Lady Hornets, however, went on a 7-2 run to cut SA’s lead to five at 34-29. Fort got fouled while shooting and made both free throws, but the Lady Hornets continued to stay in the game using their full-court pressure to create turnovers and opportunities to score.

The Lady Raiders struggled with turnovers in the fourth quarter. The Lady Hornets got to within three points at 36-33 when Ellie Williams hit two free throws. This prompted Kinslow to call a timeout with 44.7 seconds left.

However, the Lady Hornets scored again to cut the lead to 36-35. They continued their full-court pressure. However, with about 25 seconds left, SA was able to break the press and get a crucial basket by Fort. The Lady Hornets scored with about two seconds left and were ready to force the Lady Raiders into committing another turnover and score a winning basket. However, Payne was able to dribble through the press and run out the clock for the win.