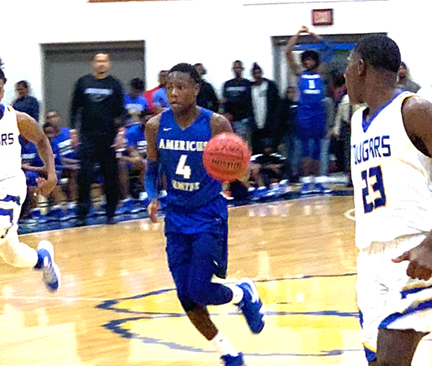 Americus-Sumter guard Trae Brown led the Panthers with 18 points in their 74-51 win over Crisp County. Photo by Ken Gustafson

CORDELE – For the first few minutes of the first quarter, the Cougars of Crisp County went toe to toe with Americus-Sumter (ASHS), but a 15-1 run by the Panthers in the first half was the turning point in what ended up being a 74-51 rout of the Cougars in the rematch of the “Battle of Lake Blackshear” on Saturday, December 15, at Crisp County High School (CCHS).

“It started with our defense, and then we had a few guys that got hot,” ASHS head coach Michael Hoffpauir said. “David Sumlin did a good job of coming in and knocking down a bunch of three-pointers. In the first half, I think we had seven three-pointers. I think that was the difference in the game.” 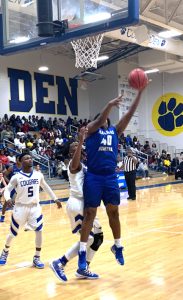 Sumlin was indeed hot from behind the arc. He had three three-pointers in the second quarter and scored a total of 10 points in the game. Trae Brown led the Panthers in scoring with 18. Joshua Lusane, who suffered a minor shoulder injury against Northside (Columbus), scored six points. All of his points came on two three-pointers.

The Panthers jumped out to a 15-9 lead in the first quarter, partly due to the two three-pointers by Lusane and one made by Brown. However, the Cougars went on a 7-2 run to cut the Panthers’ lead to 17-16.

During the next few minutes, it was a close, hard-fought battle with ASHS up 22-20. At that point, however, the Panthers went on a 15-1 run, which ended up being the turning point of the game. By halftime, the Panthers had a 50-23 lead over CCHS. ASHS hit four three-pointers in the second quarter and did indeed knock down a total of seven in the first half. 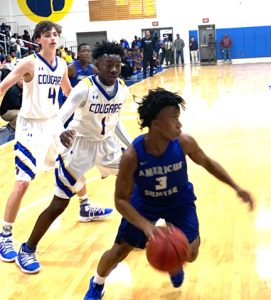 The dominance of the Panthers carried over into the second half as they were able to keep CCHS from cutting the lead below 20 points. The Cougars struggled to score due to the high-pressure defense by the Panthers. ASHS went on to win 74-51 and sweep the two-game series.

In the first meeting between the two rival schools, ASHS won easily by the score of 84-56 on Friday, December 7, at ASHS.