Patriots’ outside shooting proved too much to handle for Hurricanes 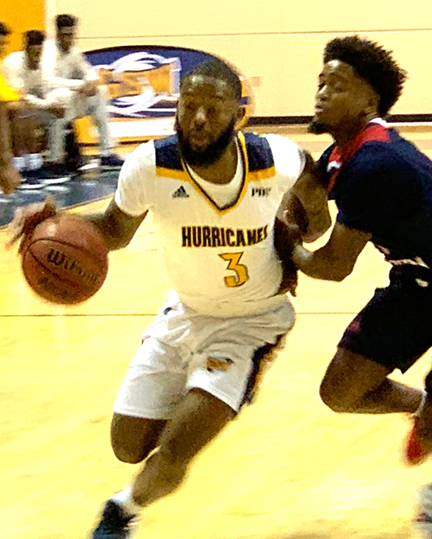 AMERICUS – It was an electric atmosphere at the GSW Storm Dome as the Georgia Southwestern State University (GSW) men’s basketball team took on Peach Belt Conference opponent Francis Marion University (FMU) in front of a packed crowd of loud and excited Sumter County middle school and elementary school students who were treated to a great basketball game. The Hurricanes, who trailed by double digits for much of the game, made a furious comeback. However, it fell short as FMU defeated GSW 90-85 on Monday afternoon, December 17.

FMU’s Brandon Parker scored 36 points and hit 6 of-7 three-pointers to lead the Way for the Patriots. The Hurricanes had five players in double-figures. Devin Watson led GSW in scoring with 17 points. Andre Statam scored 13. R.J. Sessions had 12. Grant Howard scored 11 and Quenten Taylor chipped in 10 points in the losing cause.

The first seven minutes of the first half were tightly contested, with GSW owning a 10-9 lead. Jaylen Morgan had a chance to increase the lead, but missed a slam dunk. However, Morgan was fouled and made one of two free throws. FMU went on a 10-3 run to take a 19-14 lead, but the Hurricanes scored three unanswered points, including two free throws made by Jamari Dean. However, FMU scored five-straight points on a two-point basket by Winston Hill and a three-pointer by Parker to give the Patriots a 24-17 lead with a little under nine minutes left in the first half.

The Patriots extended their lead when Jaquez Smith drove the lane and scored to give FMU a 28-19 lead. Parker then increased FMU’s lead by two more when he was fouled and made two free throws.

GSW forward Andre Statam goes up for a layup.
Photo by Ken Gustafson

However, Morgan and Taylor scored back-to-back baskets to put GSW to within seven at 30-23, prompting a timeout from FMU head coach Gary Edwards. With 4:09 to go in the first half, Morgan drilled a three-pointer to cut the deficit to 32-26. The four-minute media timeout came, allowing the Hurricanes to regroup for the last 3:53 to go in the half.

With 3:07 to go, Parker was fouled and hit both free throws, giving FMU a 35-26 lead. Parker then drilled another three-pointer to give the Patriots a 38-26 lead with a little over two minutes left.

Parker continued his hot streak from beyond the arc as he nailed yet another three-pointer. FMU scored another basket before GSW head coach Ben Hicks called a timeout with 1:08 to go in the half. The Hurricanes trailed 43-26. 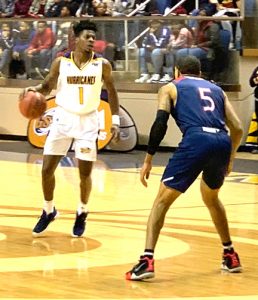 Out of the timeout, Parker continued to be hot for FMU as he hit a jumper to put the Patriots up by 19. Taylor was able to score just before the half ended, but the Hurricanes found themselves trailing 45-28 at the half.

Devon Higgs had six first-half points to lead GSW. Both teams were fairly even at the free-throw line in the first half. GSW shot 7 for 11 free throws (63.6 percent) while FMU shot 8 for 11 (72.7 percent).

Dean scored the first basket of the second half to bring the Hurricanes to within 15 at 45-30. This was followed by a basket from Watson, who scored on a layup. 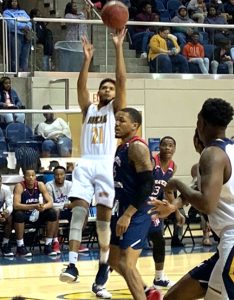 GSW guard Devin Watson goes up for a shot. Watson led the Hurricanes with 17 points in the loss to Francis Marion.
Photo by Ken Gustafson

However, FMU answered when Kailex Stephens was fouled and hit two free throws. The Hurricanes responded with baskets from Andre Statam and Watson to cut their deficit to 47-36 with a little over 16 minutes to go. R.J. Sessions then scored to bring the Hurricanes to within nine at 47-38. GSW struggled to cut into the Patriots’ lead due to the fact that FMU had an answer for every run the Hurricanes had. With 12:54 to go, Sessions was hit with a technical foul, and Parker hit both free throws, putting FMU up by 11 at 55-44.

FMU’s 1-3-1 half-court defense made it tough for the Hurricanes to score, though GSW’s outside shooting had improved in the second half.

FMU scored three more points before Statam scored on the inside to cut the deficit to 58-46 with 11:49 to go. A couple of minutes later, Grant Howard nailed a three-pointer, and the Hurricanes has suddenly cut FMU’s lead to 58-51 with 10 minutes to go.

On the Hurricanes’ next possession, Howard was able to get a round and score to cut the lead to 58-53. However, Parker nailed another three-pointer to put the Patriots back up by eight. FMU scored five straight points, but Taylor kept the Hurricanes in it when he knocked down a three-pointer. With 8:02 to go, the Hurricanes trailed 63-56.

Near the six-minute mark, Watson scored to keep the Hurricanes in the game. They were only down 70-61 with 5:49 to play. Sessions was fouled, but missed the front end of a one-and-one.

However, Howard was able to cut the Hurricanes’ deficit to 70-63 by making two free throws with 5:14 left.

GSW trailed 75-65 with just under two minutes left when Higgs nailed a three-pointer. Unfortunately for Taylor and the Hurricanes, he picked up his fifth personal foul with 1:39 to go. Parker made both free throws for FMU, but Watson scored for the Hurricanes and was fouled. He was not able to convert the three-point play. Watson later had a chance to bring the deficit back to within seven, but could only make one of two free throws. With 1:03 to go, the Hurricanes still had hopes of a comeback when Howard was fouled while trying a three-pointer. Howard hit all three foul shots, cutting the deficit to 80-74.

During the last 20 seconds, Watson hit two shots from beyond the arc. Then Sessions hit a three-pointer to bring the Hurricanes to within three at 88-85 with five seconds to go. They would need either a steal and a three pointer, or a foul and hope for FMU to miss two free throws so that GSW could try one last three-point attempt. Unfortunately, they couldn’t get the steal and the foul came too late. Jaquez Smith hit two free throws for the Patriots to seal the 90-85 win.

The Hurricanes will have one more home game before the Christmas break when they take on the University of North Carolina Pembroke in another PBC contest on Wednesday, December 19, at 2 p.m.