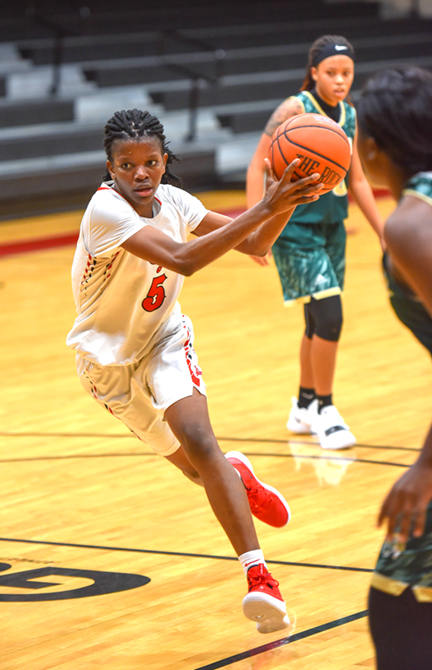 SGTC freshman forward Amara posted a double-double against East Georgia State College. She scored 13 points and grabbed 12 rebounds in the 97-46 win over the Lady Bobcats. Photo by SGTC

AMERICUS – The South Georgia Technical College women’s basketball team fell behind at the half, but had a huge second half to thrash the Lady Bobcats of East Georgia State College 97-46 on Wednesday, December 19, at SGTC.

The game started out evenly for both teams. By halftime, the Lady Bobcats led 25-24 despite having only five players available for action and no substitutes. At the beginning of the second half, however, the Lady Jets gained momentum after hitting a few three-pointers to take a commanding lead. They would go on to outscore EGSC 73-21 in the second half.

With the win, the Lady Jets improve to 12-1 overall and 6-0 in the Georgia Collegiate Athletic Conference (GCAA).

“We were terrible offensively and we had no energy defensively,” SGTC head coach James Frey said. “We just weren’t good, but we were able to play a little bit better in the second half, like we wanted to play the whole game. We will take it.”

Four Lady Jets scored in double-figures on the day as Kamya Hollingshed led the push. Hollingshed, a freshman from McDonough, GA, led SGTC in scoring with 19 points. It’s the third time this season that Hollingshed has led the Lady Jets in scoring. Hollingshed played for 20 minutes. During those 20 minutes, she was 7-for-14 from the field, 3-for-8 from beyond the arc and was a perfect 2-for-2 from the foul line.

“It’s a great classic with a lot of good competition,” Frey said. “It will be a great three days and we’re excited about it.”

Both the Jets and Lady Jets will be hosting the Holiday Classic. It will include 10 teams and 12 men’s and women’s basketball games in three days. One admission will be charged per day, allowing individuals to see multiple games for the price of one.