Shop with a Cop event puts smiles on faces of children, adults 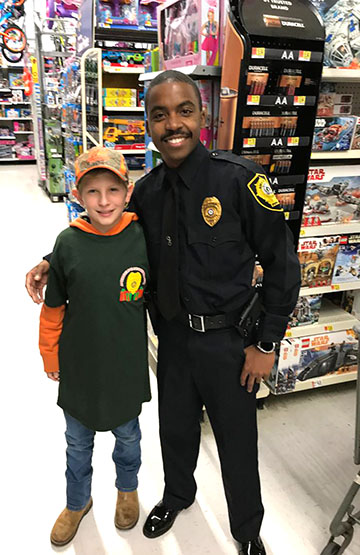 AMERICUS — Thirty children were full of smiles, as they shopped with cops on a recent Tuesday evening at Walmart in Americus.
The Americus Police Department held its third annual “Shop with a Cop” event, which, according to Americus Police Chief Mark Scott, although the program has been around for years, it was first implemented in Americus by him and his staff.
“It is prevalent around the country,” Scott said, explaining the programs he became involved with were in other cities such as Thomasville and Albany.
Scott said that basically the program the police department with Sumter County Department of Family and Children Services and the Southwest Georgia Children’s Alliance to provide Christmas gifts to local children, in an effort to create positive relationships within the community and also allows children who would, otherwise, not have the opportunity to shop for Christmas. 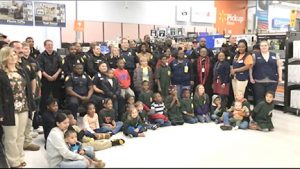 Group shot of the third annual Shop with a Cop event in Americus.

“It gives the kids the chance to interact with officers in a positive way,” Scott said, adding that officers from the Americus Police Department and the Georgia Southwestern State University Department of Public Safety joined the children for dinner at the Sheppard House Restaurant, hosting the dinner this year.
After dinner, the kids were taken to Walmart, where the they, their parents, foster parents, or guardians met and each child received a $100-gift card to shop for whatever they wanted. 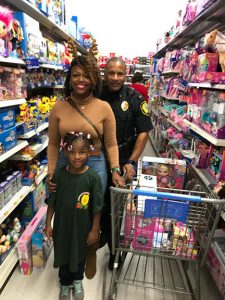 “Many never spend the money on themselves,” said Scott as he reminisced on one of the children he had one year. “He spent all his money on his family members. And I asked him what did he like to do. He said play football. So, I told him we were not leaving until he picked out a football for himself.”
Scott said it is a fun-filled event where officers are able to create positive relationships and it allows children to purchase gifts for themselves and family members. Scott said he oftentimes observes the children purchasing gifts for others or for something they need, rather than purchasing a toy or something they want for themselves.
“You have to encourage them to shop for something they would like to have themselves,” said Scott, adding these kids have “good hearts.”
Julie Scott, the chief’s wife, said, “They have gone through so much; this adds a little joy.”
The aisles throughout the toy section in Walmart was packed as 30 children and 30 cops and their wives, associates, and the children’s parents made their way through, picking out gifts.
Down the center aisle, Officer V. Hilson was shopping with 10-year-old Emily Price. It was Hilson’s first time joining in the Shop with Cop effort.
“Actually, this is my first time,” he said. “It is nice. It gives us a chance to spend time with the kids and make sure their Christmas is wonderful.” Emily was grinning from ear to ear as she said, “This is my second year. I have $105,” explaining she had five dollars of her own money. She said she was shopping for her teacher and classmates.
Americus Police Detective Quint Sims said it was his second year joining in the Shop with Cop, and he was found shopping with second grader Christian Elwick. When asked who he was shopping for, Christian said, “I don’t know, probably myself!” Sims said he always enjoys shopping with the children. “It’s great. I love seeing them smile and able to come get something they like.”
On another aisle, Americus Police Detective Cedric Smith was found shopping with a third grader. Smith said it was his third year and he has enjoyed the past three years tremendously.
“I love it. I enjoy it — seeing the kids get what they want instead of what they need on this particular day,” Smith said. 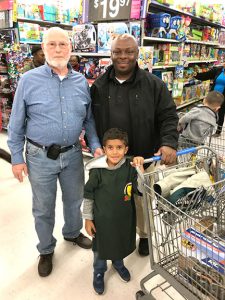 A grandparent of a shopper, 74-year-old David McGrother said, “It’s a good thing. It helps a lot of kids that normally would not get anything for Christmas.”
On another aisle, Americus Police Lt. Al Ross and his wife LaToya was found with six-year-old Oriel Floyd, who was speechless, and all smiles. When asked who she was shopping for, Oriel just had a big, bright, smile on her face, while dumping gifts into the shopping cart.
Scott said above all, they’re thankful for everyone who donated to the Shop with the Cop. “We appreciate all the donations,” said Scott, adding a big thank you to all the organizations involved in making the program a reality, including civic organizations, churches, and the many individuals who approached him with donations.