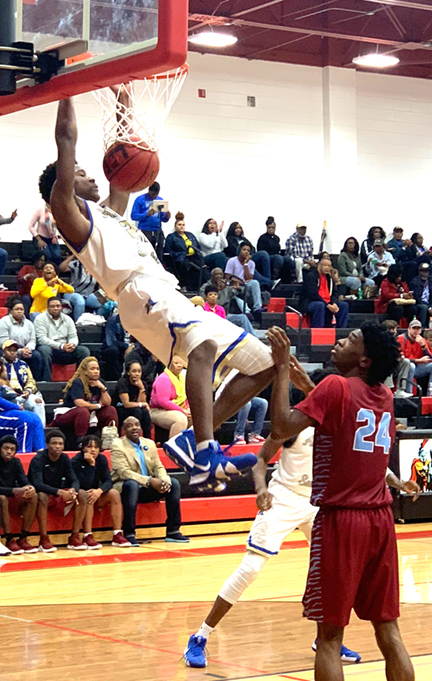 LEESBURG – The Americus-Sumter Panthers (11-1, 5-1) got a sneak preview of their Region 1-AAAA opponents Carver (Columbus) on Friday, December 28, at the Lee County Round Ball Classic at Lee County High School. Though they got off to a rough start, the Panthers went on a 16-2 first-half run and took control of the game from there, routing the Tigers 80-54.
“They came out really aggressive and we just weren’t prepared for it. We should have been, but we weren’t,” ASHS head coach Michael Hoffpauir said. “Once we took their first lick, we bounced back and regrouped. We came out a little more aggressive. We tried to change our defensive game plan and it worked out for us.” 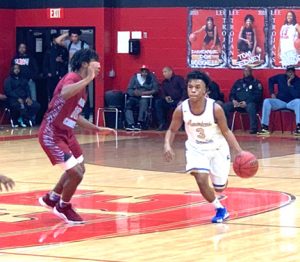 ASHS guard Melton McCoy pushes the ball up the court against Carver (Columbus) at the Lee County Round Ball Classic.
Photo by Ken Gustafson

Three Panthers scored in double-figures. Joshua Lusane led all scorers with 18 points and Quevoluia Willoughby scored 13. David Sumlin scored 10 points, including two three-pointers. Joshua Moore also chipped in nine points in the winning cause.
Sumlin opened up the scoring by knocking down a three-pointer to give the Panthers an early 3-0 lead. However, the Tigers went on a 10-0 run, capped off by a three-pointer by A.J. Watts. Carver (Columbus) scored two more baskets before Hoffpauir called a timeout with five minutes left in the first quarter. The Panthers still struggled for the rest of the quarter and were down 22-11 after the first eight minutes.
However, it was as if a sleeping giant had been awoken. In the second quarter, ASHS went on a 16-2 run to take a 27-24 lead. A pass from Trae Brown to Willoughby for a slam dunk got the ASHS crowd excited. The Panthers came out of their slumber to play their normal, exciting brand of basketball. It was an evenly-played game for the remainder of the first half, and the Panthers went into halftime up 34-32. Willoughby led the Panthers with nine first-half points. 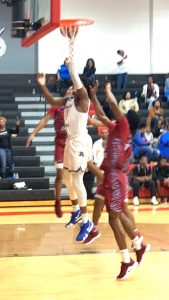 The Panthers went on a 6-0 run to start the second half, capped off with a basket by Melton McCoy. At the 4:05 mark of the third quarter, Lusane scored on the inside to give the Panthers a 46-36 lead. The Panthers continued to assert themselves on the offensive glass as Moore scored off a rebound to give ASHS a 48-38 lead. Both teams traded baskets on their next offensive possessions, but Jalen King hit a jumper to bring the Tigers to within eight at 50-42 late in the third quarter.
With a little over a minute left in the third quarter, Moore drove to the basket for a one-handed dunk that was missed. The Tigers got the rebound off of the missed dunk and scored at the other end, making the score 52-44 ASHS. Carver (Columbus) got the ball back, and Watts was fouled while shooting. Watts made both free throws, bringing the Tigers to within eight at 54-46.
With 7:12 to go in the fourth quarter, the Panthers got the ball inside to Lusane, who finished a two-handed slam to give ASHS a 57-48 lead. This began a 9-0 run by the Panthers, which was capped off by a three-pointer by Sumlin. With under five minutes to go in the game, Brown created a steal and passed the ball to Moore for a layup, giving the Panthers a 68-50 lead. ASHS scored another basket before Carver (Columbus) head coach Warren Beaulah called a timeout with four minutes left.
The Panthers were able to take control of the game as a result of their high-pressure defense and cold shooting in the fourth quarter by the Tigers. By the three-minute mark of the game, the Panthers were in total control. They put an exclamation point on the game when Willoughby drove to the basket for a one-handed dunk. ASHS went on to win 80-54.
For the Tigers (8-3, 5-1), they were led in scoring by Jalen King with 16 points. Two other players were in double-figures for Carver (Columbus). A.J. Watts scored 15 points and Devin Flowers had 12.
Though it doesn’t count as a region win, it was a good opportunity for the Panthers to see the strengths and weaknesses of one of their region opponents, as well as themselves. The two teams will meet again in a Region 1-AAAA game on Friday, January 11, at Carver (Columbus).