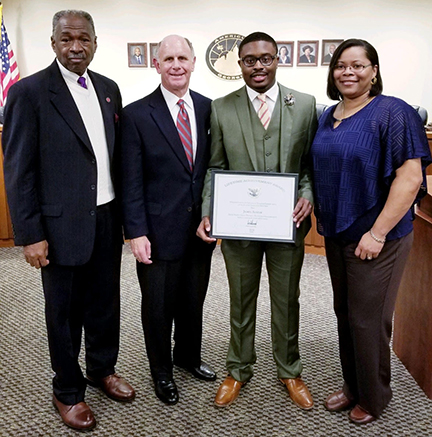 AMERICUS — James Austin, a native of Americus, now living in Macon, was presented with a Presidential Lifetime Achievement Award during the last meeting of 2018 of the Americus Mayor and City Council.
Austin received the award, on behalf of President Donald Trump, from Krystal Heath, coordinator of the Sumter County Family Connection Collaborative.
Austin’s life of service began at a very early age. His lessons of compassion and altruism were instilled by his active involvement on the Greater Cedar Spring Baptist Church Youth Usher Board. During those years, the foundation was laid for the Renaissance lifestyle he now embodies.
Austin attended Morehouse College and gained valuable insights on how to serve in a structured capacity. It was there he earned his bachelor of arts degree in finance with a minor in sales. He logged over 1,000 hours of service in the Metropolitan Area and was awarded a Proclamation from the Atlanta City Council in 2014, for his efforts.
In addition, Austin taught and mentored children from various backgrounds, who, under his guidance, have become productive citizens in life, academia, and the workplace.
Austin has established a footprint in the educational field and is easily the youngest chief financial officer (CFO) of a chartered public school system in Georgia’s modern-day history. He obtained such achievement at the tender age of 22, and has had continued success in that capacity for the “second time” at Twiggs County Schools.
Austin says that his greatest achievement is the birth of his daughter Taylor and earning the title father. He is an active member of Kappa Alpha Psi Fraternity Inc. and is a Charter Line Member by way of the Americus-Sumter Alumni Chapter. In addition, he has followed in his grandfather’s footsteps as a member of the historic St. John’s Lodge #17 in Americus.
Austin co-founded a $450 million corporation that will lead urban development in distressed communities along with his father Frank Austin (CEO and chairman). The Propel Opportunity Fund Inc. focuses on opportunity zones across the nation, and will impact lives greatly in its work as a stepping stone to assisting communities. James Austin states, “Communities need to take advantage of the opportunity funds that invest into these zones to increase economic development and build self-sustaining infrastructures.” He encourages the community to pitch their ideas on what change they would like to see at www.propelopfund.com.
In addition, The Frank Austin Center has laid the foundation for urban development in Georgia, and is authorized to issue the Presidential Lifetime Achievement award for those who qualify on behalf of the President’s Office. “I am grateful for the Frank Austin Center for considering my works, and I look forward to impacting communities across the nation,” James Austin said. “I believe this is a season of young leaders stepping boldly into their roles and safeguarding America’s future. I am just crazy enough to believe I can change the world, one community at a time through service.”
Austin was given a standing ovation as he accepted the award at the city council meeting.

By Beth Alston AMERICUS — As a result of an investigation, local authorities have charged a local man with felony... read more