Lady Jets get blown out by Shelton State 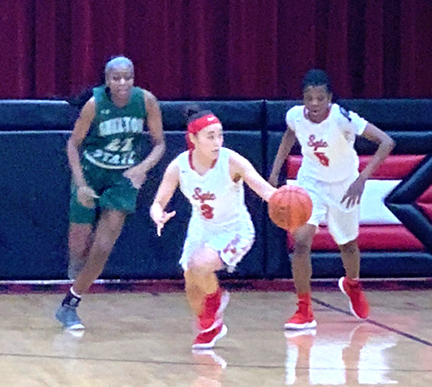 AMERICUS – The South Georgia Technical College women’s basketball team came into the Lady Jets Holiday Classic with a record of 12-1 on the season. However, the Lady Bucs of Shelton State College imposed their will from the start and took control of the game, winning 85 -43 over the Lady Jets at the Hangar on Sunday evening, December 30.

The Lady Jets were coming off an 82-72 win over St. Petersburg College in the first round of the Lady Jets Holiday Classic on Saturday, December 29.

“We were just flat. We just didn’t play well. Their coach told me that we caught them on a bad day and that they played their best game all year. I told her that this was the worst game we’ve played all year,” SGTC head coach James Frey said. “We’ll find out tomorrow what we’re made of. How you respond to games like that will determine what you are down the road. We’re 13-2 with a chance to come out of the tournament 2-1. We play a really good East Florida team tomorrow. We’ve got to go play. We’ve got to be ready to play. We can’t show up and lay an egg like we did today.” 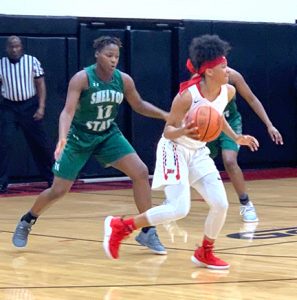 SGTC guard Ricka Jackson with the ball looking to pass. Jackson scored three points in the loss to SSC.
Photo by Ken Gustafson

Coach Frey was referring to the Lady Jets’ final game of the tournament against East Florida College on Monday, December 31, at the Hangar. Tip-off is scheduled for 3 p.m.

For the Lady Bucs of SSC, they had three players in double-figures. Latascya Duff led all scorers with 19 points and Ataiya Bridges scored 12. Tiyah Johnson also chipped in 11 points in the winning cause. 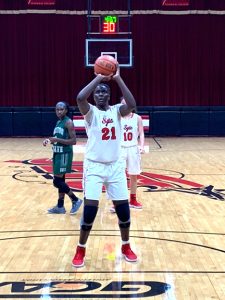 SSC jumped out to a 17-9 lead in the first quarter. The Lady Jets struggled to score on the offensive end and struggled defensively as well. The Lady Bucs were able to score a few fast-break baskets and they were able to score against SGTC on the inside as well. The Lady Jets seemed to struggle with their interior defense as the Lady Bucs got some easy baskets on the inside. At one point in the second quarter, SSC jumped out to a 39-15 lead on a three-pointer by Cierra Cunningham. At halftime, the Lady Jets trailed 41-17. 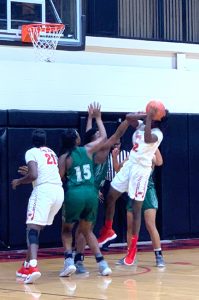 However, it didn’t help much as the Lady Bucs continued to score baskets on dribble penetration and fast-break layups. By the 1:14 mark of the third quarter, the Lady Jets had fallen behind 64-23. 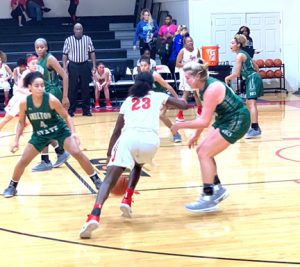 After their final tournament game against East Florida College on Monday, December 31, the Lady Jets will return to conference play when they travel to Macon, GA to take on Central Georgia Technical College on Wednesday, January 2. Tip-off is scheduled for 5:30 p.m.