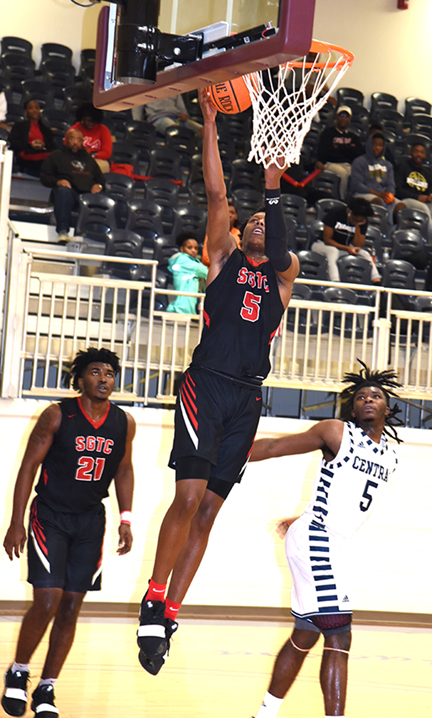 SGTC freshman guard Justin Johnson (5) was the only Jet to score in double-figures with 26 points in a disappointing 76-71 loss to GCAA opponent Central Georgia Technical College. Photo by SGTC

The loss drops the Jets to 4-11 overall and 0-1 in the Georgia Collegiate Athletic Conference (GCAA).

The Jets missed several dunks, free throws and committed turnovers in the last two minutes of the game. With less than eight seconds remaining, the Jets had the ball and had a chance to tie the game. However, they were unable to inbound the ball. The Titans got the ball, went the length of the court and scored the final basket to win.

SGTC freshman guard Justin Johnson led the Jets in scoring with 26 points. Johnson scored 14 in the first half and 12 in the second half. He shot 12-of-23 from the field and went 2-for-3 from the foul line. Johnson was the only SGTC player to score in double-figures.

The Jets will try to rebound from the loss and will try for their first conference victory when they host Andrew College on Saturday, January 5. Tip-off is scheduled for 3 p.m.